OCHE queen Fallon Sherrock admits she’d love the ‘new normal’ of darts to be women beating men. The Bucks fi zzer returned to the big stage at the Bwin World Series after rocking the sport with victories over Ted Evetts and Mensur Suljovic at the 2020 World Championships. But mum-of-one Sherrock, 26, has got her sights set on a time when it won’t be headline news anymore that women are winning. She vowed:

“The next step is not just about a woman beating a man. It’s just two great players taking on each other. Yes, it might happen to be a woman but it’s not seen as a woman. “I know that this is a new thing in darts but it would be really nice to get to that point that it’s not a surprise anymore.

“What Lisa (Ashton) has done is brilliant. It’s such an achievement and it’s something I’m inspired to do as well. “Seeing how she’s beating all these men on the ProTour gives me more of an incentive. I want to get to Q School and get my Tour Card.”

Next up for the Queen of the Palace is trying to book her ticket back to the Palace. Sherrock was naturally quick to praise the new PDC Women’s Series in Cannock in October:

“The Ally Pally is still fresh in my mind. I know a lot of stuff has happened over the past few months. But watching the games back and reliving it all it gets me excited to get back playing again on stage.

“I think the ladies tour is a great idea. I’ve always said we need more opportunities and now we can show how our standard has improved over the past couple of years. This is a perfect chance to show what we can do.

“Obviously if I can qualify I’m going to be so excited again. I loved playing in the World Championship and that is where I want to get to again. It was such a surreal experience. I’m going to try my best to get there.”

Sherrock admits it has been a “worry” to travel again as she remains in the vulnerable category after suffering from a kidney disease six years ago - and being away from her young son while the coronavirus is still a big threat.

She added: “I’m not too keen on wearing the facemask because I can’t breathe. But it’s all to do with safety especially with my health problems. I will be wearing a facemask literally everywhere that I go.

“It’s always going to be a worry. I have to take the right precautions and do what the Government says. I’m also going to be wearing gloves for every surface that I’m touching and I’m keeping my distance from people. If I take all the precautions it should be safe to travel. “Since lockdown I’ve been spending a lot of time with my son. There’s obviously a lot more stuff to worry about than the darts.

“I’ve got my number on his iPad and he can call me anytime he wants and I’m getting a phone call every fi ve minutes. It’s really nice because I’m always in communication with him. When it comes to playing I’ll need to find some space and not worry as much. “As long as I talk to him before and after matches and not worry about the virus I should be OK.”

Sherrock has played in a few online matches during the virus crisis but also feels that the break from the limelight wasn’t such a bad thing for her. She added: “It’s not been very frustrating, a bit disappointing. I was obviously really looking forward to playing darts around the world and places I’d never been to before. “In fairness, it’s probably done me a bit of good. I was so busy and playing so much, I think I needed a break.

“The lockdown has given me the time to refuel, get all my energy back up and hopefully it’s worked out for me. “I love just playing in general and when there’s a crowd behind me it’s such a good atmosphere. It’s a buzz and proper gives you more of a platform to play better. That’s still kind of a new thing for me. I love the fans behind me. I think it’s a very exciting prospect to get the fans back.”

Sherrock also revealed that she hopes another organisation to save the amateur World Championship as British Darts Organisation remains in crisis. She added: “It is sad to see it. When I was little the Lakeside was always on the TV. My mum, dad and sister would all watch it. I always wanted to be there. “I still remember the first year I was there, so many good memories. It is really disappointing but I suppose things happen in life and there’s nothing we can do about it.

“But I’m hoping another organisation takes over and we can rebuild it all and hopefully there can be another World Championship for the amateur game.” “ I’ve always said we need more opportunities and now we can show how our standard has improved. This is a perfect chance to show what we can do. “
-------

Fallon Sherrock holds the record for the most 180s thrown at the Women’s World Championship (13). Data available from all matches in 2020 suggests she is better than 50/50 to land the third treble once the first two are in. @DartsDatabase 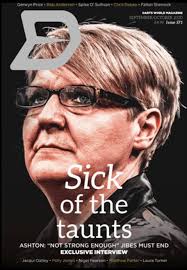