IT seems a tradition for me to replace my dartboard after six months - once at the start of January, and again around the start of July. So by all logic, I should be replacing my practice board around now with the new One80 Gladiator 3 board I have sitting in my cupboard. It appears this year, however, I'm breaking tradition.

Having owned and used most mainstream dartboards through the years, I decided to experiment once again with a new style, and so opted for the Mission Samurai II to replace my much loved Unicorn Eclipse board, which had seen better days. As a county player, I felt it best to familiarise myself with the board early on, to find out if I needed to make any alterations to my setup, in preparation of the county season resuming in September. As well as this, the board was the cheapest on the Darts Corner website, priced at just £32.95 - what's not to love!

At first glance, I was impressed. The board itself is bright and vibrant, allowing for greater focus on whichever of the eighty-two total segments you decide to aim at. Supplied with the board was a fixing bracket and rubber stops, as well as a clear number ring, which can be removed to allow for board rotation. Unusually, the board arrived in a plastic wrap - something I'd not seen before when purchasing a new board. As far as I am aware, this is to prevent damage during storage, and in transit, preventing moisture from seeping into the fibres. The board is held together in a metal casing, meaning magnetic halo lights, such as the Target Corona or Mission's own Torus light will be able to easily clip on to the side. 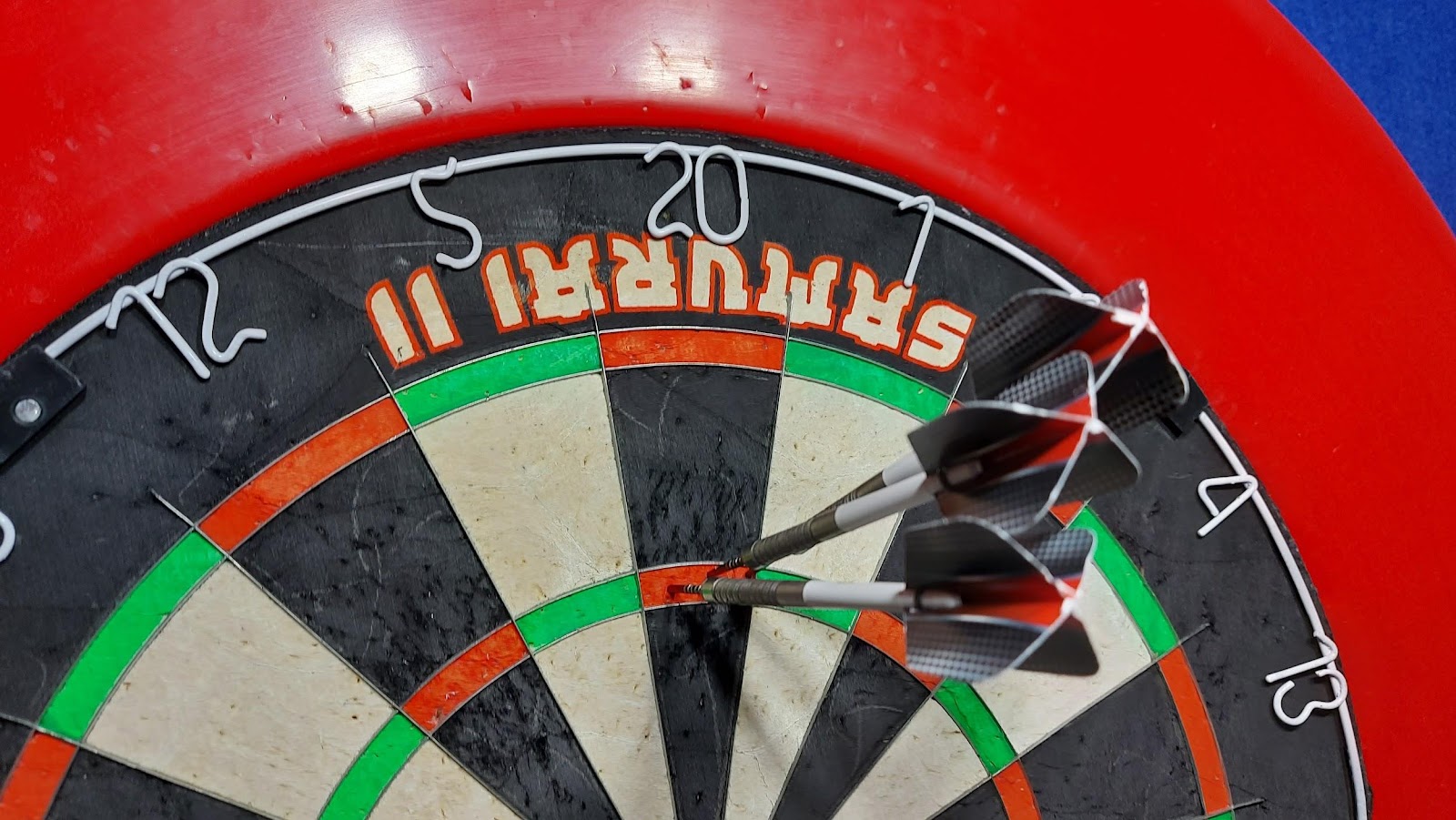 At the time, I had to use folded paper to hold the board steady, as I found the rubber stoppers to be too small to sufficiently stabilise the board. Mission rectified this issue themselves when they released the Mission Dartboard Wedges, which I quickly ordered - this worked perfectly, and I highly recommend investing in them, regardless of which board or fixing method you use. As Winmau's locking system also resolves this issue, on Blade 5 boards, the additional cost of wedges etc. should be kept in mind.

My first impressions were… not good. I found my points simply didn't penetrate the board deep enough to grip the fibres, and so had far too many darts falling out of the board. It was around this time I was experimenting with various styles of points, and found that, while the Unicorn points I was using didn't seem to grip the board, standard black points seemed to have no issue. After a little more experimentation, I discovered Winmau points offered what I required from a point, while also gripping the board sufficiently, and so settled with those. 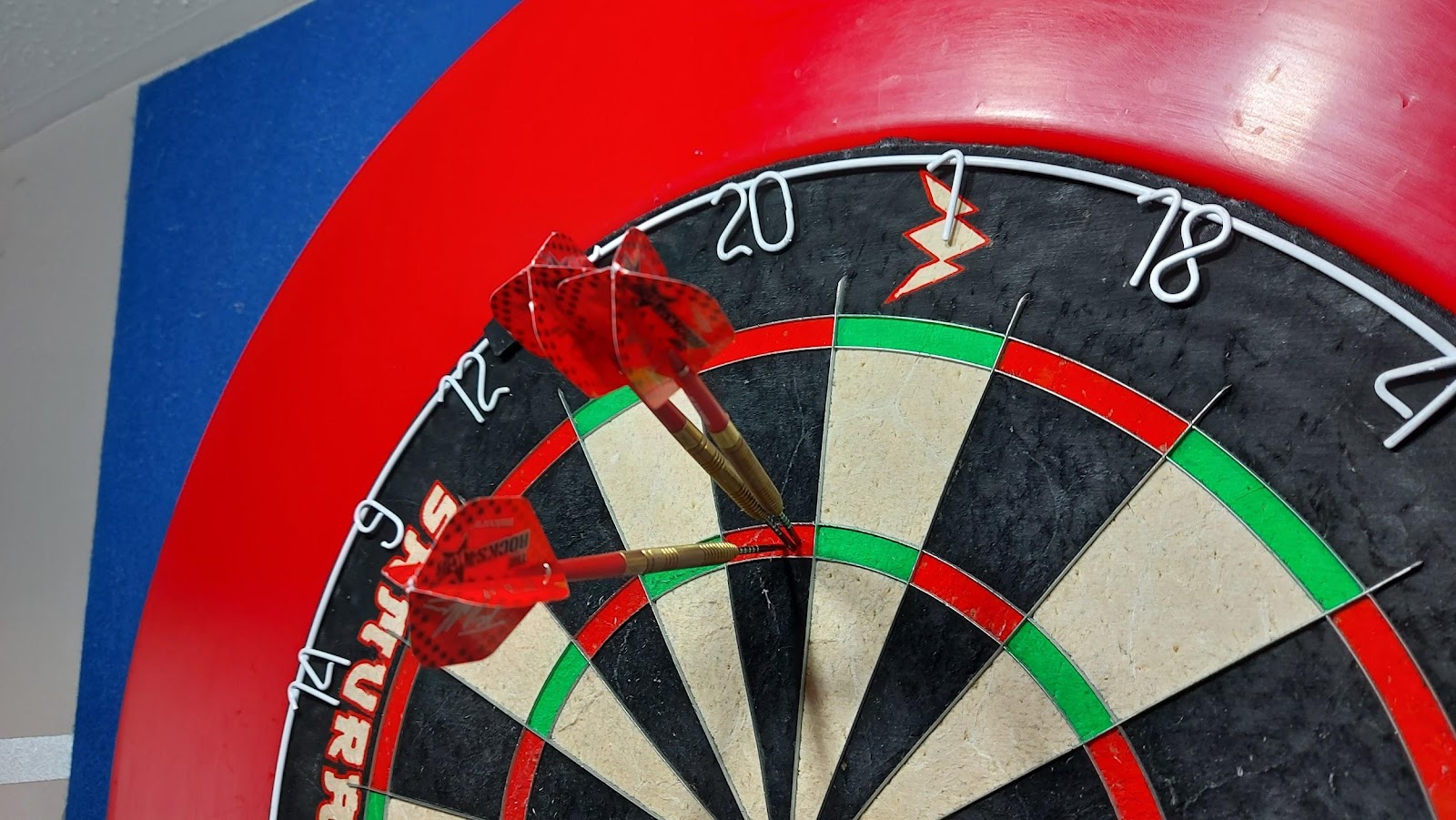 The board felt naturally hard, reminding me of the One80 Gladiator 3 board that myself, and the rest of my county team, had been complaining about for the past year. While I'm not one to use aggressively grooved points, I found myself considering them many times while using the board. After a month or so of daily use, the board did begin to soften up, much to my relief. I typically rotate the board every few days, in an attempt to prolong its life as much as possible. One positive, however, to the harder board is that the darts stick much further out, allowing for closer grouping, and more room in the treble bed. As a player that prefers longer points for this exact reason, I can say with confidence I play a lot better with the Samurai II board than with most others.

One issue I've had in the past is the way various boards react to the humidity of my practice room, which is typically quite high. While I've never had issues with the Winmau Blade 5 and Unicorn Eclipse, I found that with the One80 Gladiator 3 and Unicorn Eclipse HD2, I had wires coming away from the board, eventually resulting in the bullseye of the HD2 simply falling out! I had my concerns this would happen with the Samurai II, owing to its likeness to the two aforementioned boards.

This wasn't the case. After six months of use, the wires still sit near flush to the board, in identical condition to the day I put the board up. There has been no bending of the wires, something rare in dartboards, with a few manufacturers beginning to push the boundaries between the strength of the wiring, and their pursuit of creating a thinner spider. 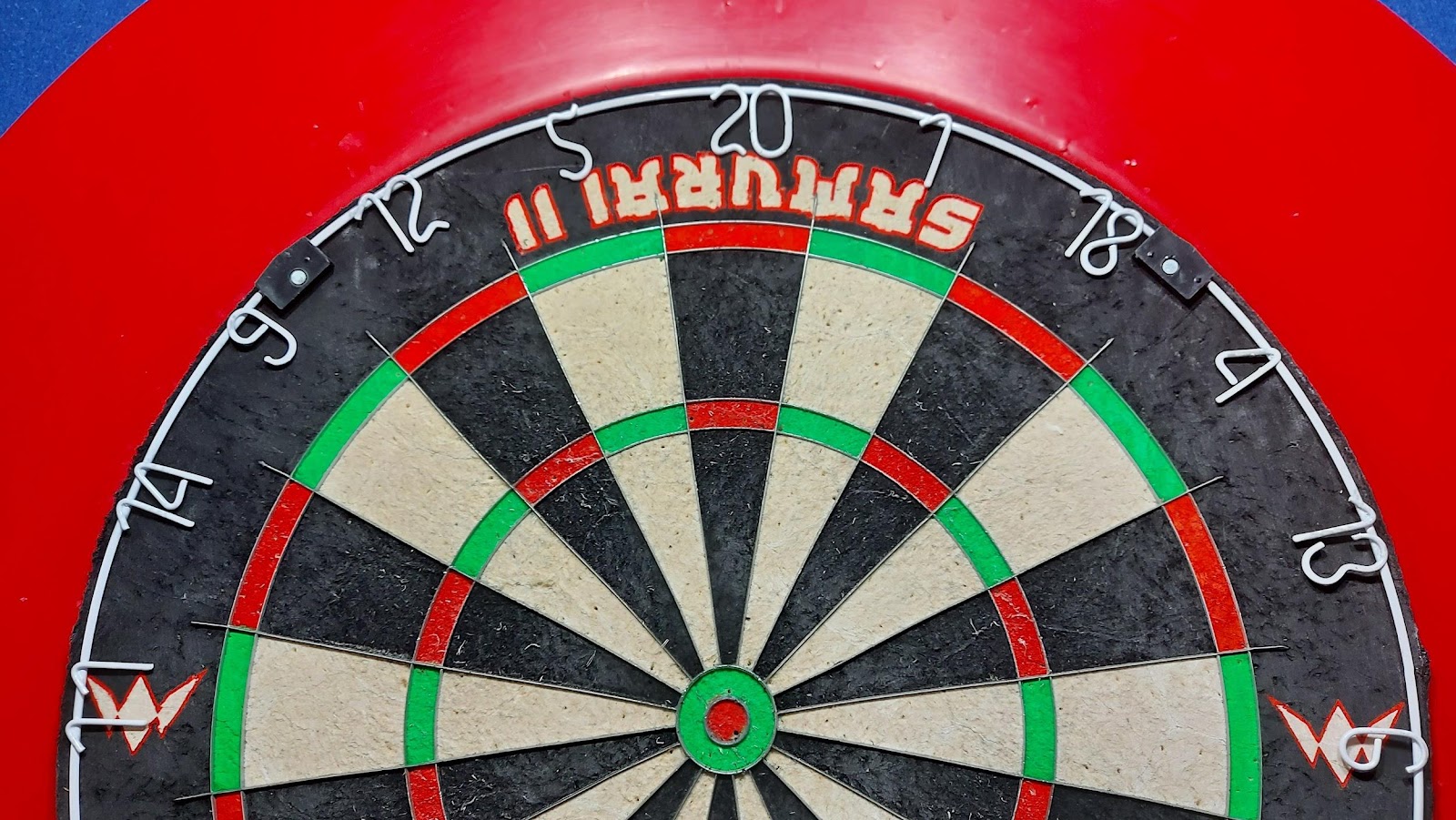 In terms of the bristle longevity, overall I was very impressed. After six months of use, I have no desire to replace the board, despite an estimated 350h hours of use since the day it was put up (based on approximately two hours of practice a day). While the sisal underneath is beginning to show, the damage has been kept to a minimum. In parts, however, small raised 'bubbles' have begun to appear, though as of now, they do not impact the performance of the board, nor the appearance of the board when throwing.

As I do with most of my reviews, I put a post up on social media, asking for your comments on the board, from genuine users like myself.

Fellow darts reviewer Kurt, from 'Matador Darts', told me it is the "best value for money board on the market. [The] only negatives I have is [that] the 'white' segments seem to discolor over time a little quicker than other boards". He went on to say that the "bullseye segment is especially firm as well. I get many more bounce outs there than other boards".

Over on Facebook, Nigel Peters was more critical of the boards. He stated that they are "pretty inconsistent boards, some areas seem to be fine [and] some seem way off. Colouring isn't the best on some of them, and they wear pretty quickly, even with silver or black points. Had two and both were a let down".

So there you have it!

Personally, I can say with confidence this is the best dartboard I have used so far. While difficult to get on with at first, I'm glad to have persevered with it, and will continue to use it for the rest of the year.

Feel free to message me on Twitter, @JoeReid180, with any questions you have about the board! I'm continuing to use it until January 2022, and so will be able to further comment on its condition through there. 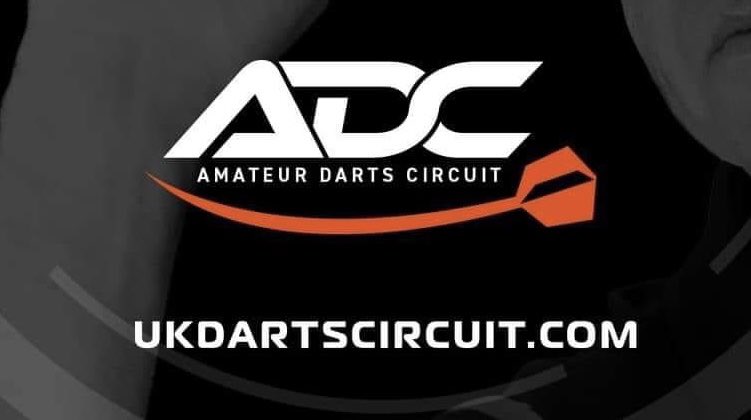 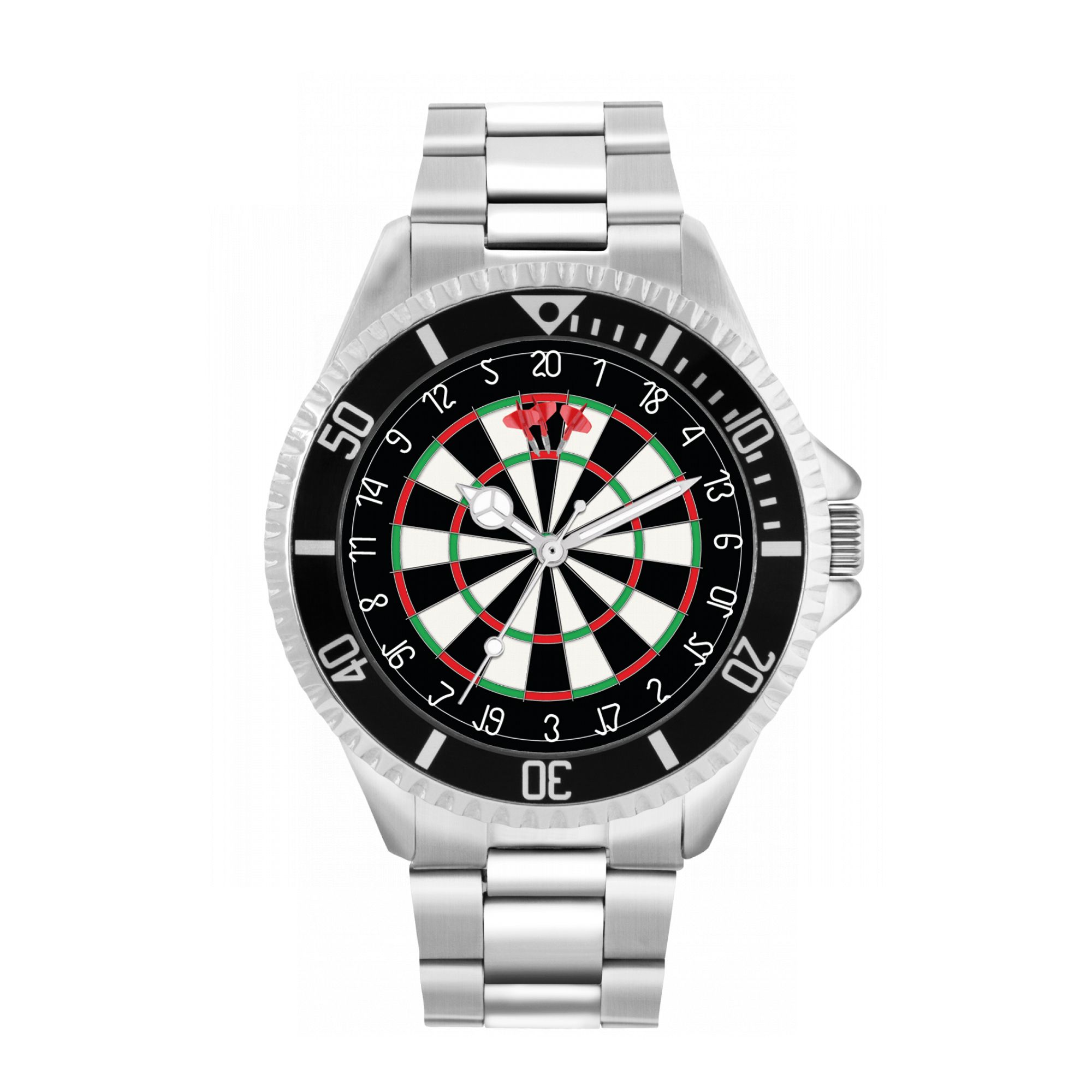 A reminder of a superb performance and the next three winners!