Periodically Winmau release a range of 'Special Edition' darts commemorating the careers of some of the brand’s top-tier talents. This has included new barrels for Dennis Priestley, Simon Whitlock, Ted Hankey and Andy Fordham, bringing, as Paul Nicholson alluded to on Winmau's official reveal, their classic designs "into the 21st century".

Shortly after the launch, Winmau ran a competition on their social media pages to win one of the seven sets revealed in the launch. Naturally, I decided to enter, opting for the Andy Fordham barrels as my preferred prize. You can imagine my shock when I looked at my phone notifications to discover I'd won! Within a week, they were in my hands. It seems only fair to share my views with the readers of Darts World magazine!

With all of Andy's previous darts, the profile has remained consistent - these are no exception. That is, however, where the likeness ends. An extremely aggressive grip, with an added titanium nitride coating truly sets these apart from his previous designs, with the central section utilising cuts unique to this set!

The darts arrive in a stylish blue box, with a large window displaying the darts themselves. The box truly showcases the high level of research and development that goes into every set WInmau produces, with mentions of the titanium nitride coating and the unique Winmau Prism technology in clear view.

Housed in a black foam insert, the darts are securely locked in place during transport thanks to the angled Winmau point protector. To the left are a set of Winmau Prism Force stems, and Winmau Prism Alpha flights, meaning the darts can be fully assembled in less than a minute, to be taken straight to the oche!

Straight out of the box, I fell in love with the grip. Not too dissimilar to that of my own match-darts, the Fordhams offer an extremely rough feel, thanks to the unique "state-of-the-art double-mill cut". The double-mill cut is essentially a standard ring grip, with a deep 'v' cut through the centre, separating the ring into two triangular sections. With the spacing between each of the five split-rings spanning 1.5mm, this allows your fingers to sink deep into the grip, drastically reducing the chances of any darts slipping.

Unlike with some of Andy's past retail sets, these darts do not feature a deeper cut rear grip. With his old silver atomised darts and black PVD coated darts, there was a razor grip section towards the rear, slightly extending the barrel. The SE darts pay homage to Andy's tried and tested match-darts, with the grip solely focused towards the centre of the barrel.

Despite this, the darts do feature two lightly machined sections at both the front and rear of the 40.6mm barrel. These extremely subtle cuts, while too shallow to be used as a practical point of grip, can assist in finger position for those who hold the dart nearer to the point or stem. Personally, I feel these sections have been added more for aesthetic affect. The cuts, much like the central grip, utilise the blue titanium nitride coating, creating a stunning visual effect when coupled with the striking white stems, and deep blue flights included with the barrels. 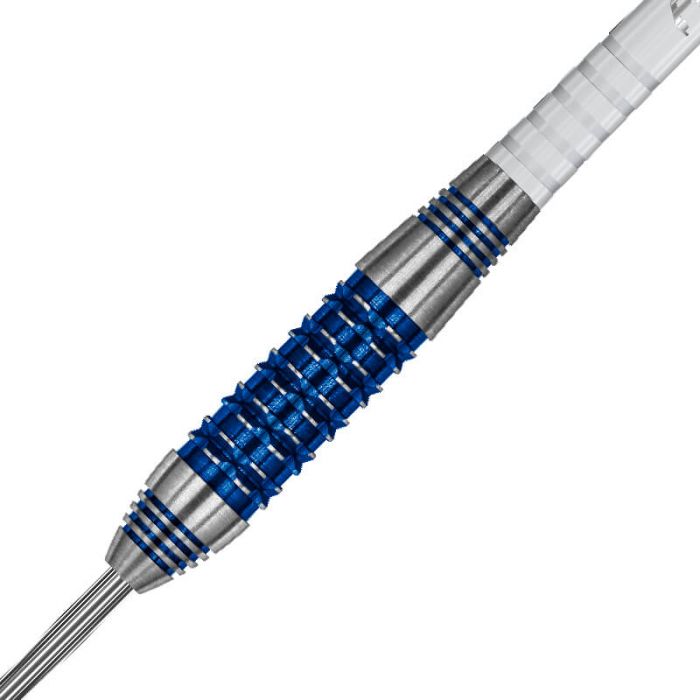 The one issue I had with these darts was the points. As a rule, I typically steer clear of standard silver points, as I tend to have an awful lot of 'fallouts' while using them. While the supplied points seemed to grip the board well, visually, they took a beating. I'd recommend taking a look at some of Winmau's fantastic range of replacement points before purchasing these darts, and utilising the repointing services most reputable darts suppliers offer, should you not own a repointer.

Via social media I  asked for people's general thoughts concerning these darts. YouTuber 'Scottish Lad Does Darts Reviews' informed me that "they are really grippy, and although they may be small, they certainly pack a punch", alluding to the force the darts hit the board with, owing to the heavier weight and smaller size.

Over on Facebook, Dave Williams claimed "they performed as good as [Phil] Taylor's Generation darts, but a lot cheaper", when used with more ‘Tayloresque’ set up. The price was a key factor for Dave when choosing the darts, with the Fordham SE darts retailing at just under half the price of the latest set in Target's Phil Taylor Generation range. Nick Toft certainly agreed, commenting "I preferred them to any of the Taylor [Generation darts]".

Another Facebook commenter, Nigel Peters, believed the darts were "very grippy", yet for his own personal game, he found an issue. He discovered the darts "didn't quite work with the stock setup". He "got some longer stems and some bigger flights on them", and felt that, for him, it "worked better that way. [The] darts are landing quite flat, which I like".

I'm glad that after considerable use, I'm able to repay Winmau for their fantastic giveaway with this review for Darts World Magazine!

In my local team, I've had two players purchase these darts after trying mine down the pub - one of which has used them consistently on stage in the BICC (pre-lockdown, of course)!

With a timeless style, having been used by the likes of Lowe and Taylor over the years, Andy Fordham's new arrows are a unique alternative to the typically basic styles of grip seen on most bomb-shape darts. With the market precedent being a standard ring-grip for this style of dart, it's a pleasant change to see a company tear down the blueprint and set their own precedent - I truly hope Winmau have set the ball rolling with the reimagination of classic designs.

Both the SE and the Onyx coated version of The Viking’s dart are still widely available.

-----ENDS-----
Editor's note: Sadly, Andy Fordham passed away in the days since this review was published.

Rock and Kciuk grab headlines as Fallon misses out