RECENTLY, I was lucky enough to catch a word with Devon Petersen for my latest piece for the Darts World website. I spoke to the 'African Warrior' about his choice of equipment over the years, ahead of the release of his latest 'weapons of choice'. I briefly touched upon the Type 2's, and so recommend checking it out as a 'prequel' to this review.

Having truly found form while using the darts from new equipment sponsor Trinidad, Devon decided a few tweaks were in order to help sustain his form, and to reach new heights within the PDC. The change was made for two reasons:

"The length of the dart, and the grip at the back of the barrel". Debuting his new Type 2 darts in the 2021 UK Open, he brushed aside Jeffrey de Zwaan, Scott Waites and Peter Jaques, before falling to defeat at the hands of the new PDC World Champion, Gerwyn Price."

It's extremely rare for me to pre-order a set of darts - I've only ever done so once prior to these, but when I saw Devon promoting his new Trinidad Type 2 darts, I knew they were a set I had to add to my collection and to share my findings with you all: 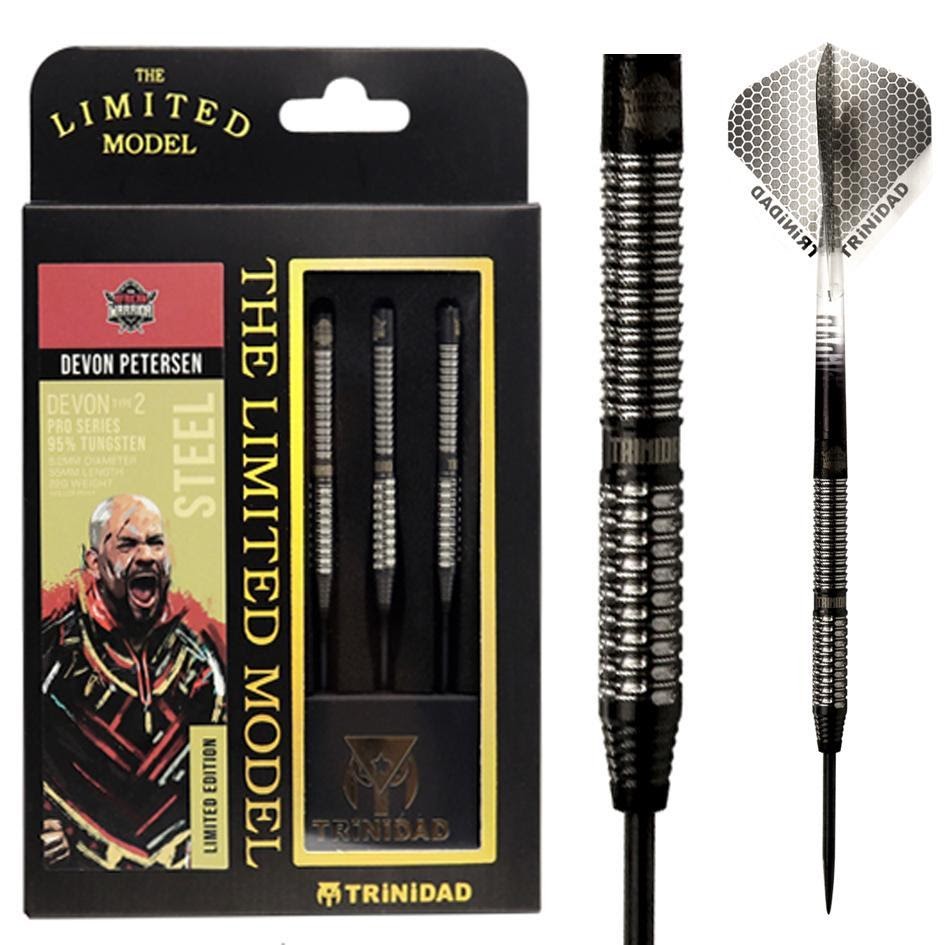 The darts feature two unique styles of grip, covering the full length of the 55mm long barrel. As well as the standard, silver edition, Trinidad have also released a 'Limited Edition' barrel, with a black PVD coating. This is the set I will be reviewing today, though the dimensions are identical between the two.

Having ordered my set, the limited edition steel-tip, directly from Devon Petersen's website, I was lucky enough to receive my set inside of a signed box, as well as a signed player card. Arriving in stylish black packaging, they would look truly stunning on display, whether simply on a shelf, or framed, along with the signed card. The darts arrive comfortably secured within the packaging, ensuring they will arrive in the same condition they leave the factory in.

Steel Tip - Limited Edition (the darts featured in this review)

As I mentioned previously, the darts feature two contrasting styles of grip. The rear grip, in which Devon uses to hold and propel the darts from, is an interesting variation of the razor grip utilised on his Type 1 darts. Despite using a thinner grip than on his previous barrels, Trinidad has by no means made any sacrifices, offering an extremely high level of grip to the user - exactly what Devon wanted. The thinner grooves offer a more 'comfortable' feel, something Devon held in high regard when designing the barrels. "The dynamics of the new dart is amazing", he informed me, commenting on the general level of comfort he feels when using his new Trinidad equipment.

The front section of grip is a little more… interesting. An interlocking hexagonal design helps to create a unique 'honeycomb' grip, which creates a 'diamond' look to the dart. In terms of feel, while not intended as a 'practical' point in which to hold the dart from, the honeycomb grip closely resembles that of a light knurling. Additionally, the interlocking sections seem to add another dimension to the dart, with the connections in between the hexagonal cuts imitating raised longitudinal grooves across the 16mm long grip profile.

At the very rear, and very front of the barrel is a small micro-grip section. On the rear, the micro grip allows for a smooth transition between the harsh razor grip of the barrel, and the smooth Condor AXE stem that Devon sets so much store by. As well as the micro grip on the taper, a subtle ring grip has also been added, ideal for players that rest a finger on the taper in order to support the barrel while throwing.

It was this front section, however, I discovered a slip in Trinidad's quality control. On one of the three barrels, I discovered a slight chip, as if the darts had been thrown before. While easy enough to cover in permanent marker, I felt slightly let down that the error hadn't been picked up before packaging.

At the very centre of the barrel is a subtle scallop, nearly identical to that of Devon's Type 1 darts. This 4mm section, acting as a buffer between the two prominent grip sections, has been added to assist in balancing out the dart, which has been designed to have a central balance point. This was of paramount importance to Devon, with the centre of gravity allowing the dart to fly more "direct and consistent", meaning he can be "more aggressive in games". 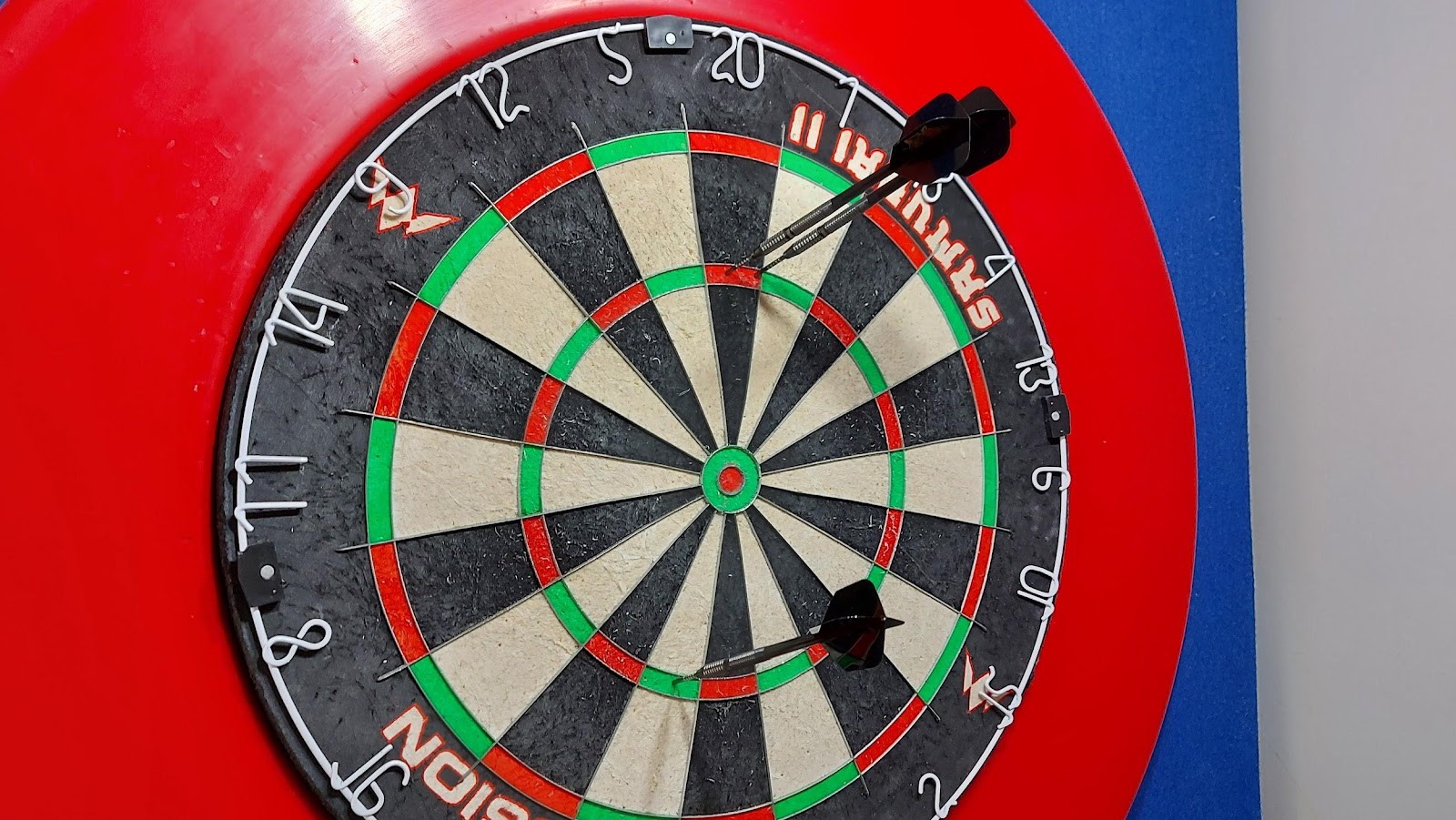 I put a shout-out on social media, to find out the thoughts of other Trinidad Devon Petersen Type 2 owners.

Roger Osborne, who, like me, had previously owned Devon's Type 1 darts, informed me that he's "loving the grip on the barrel [as it] feels very comfortable for my throw". He also goes on to comment on how he "really like[s] the setup", kitting his darts out with the new 'African Warrior' Condor AXE flights.

Another positive comment from Phil Day, who'd also followed Roger in changing up the supplied setup. "I changed the points to my [MIBGrip**] points and these are perfect!", he explained, "Great balance and weight for me, and I love them". Phil loves them so much, he'd even purchased a second set, opting for the standard version to complete the set.

I'd like to firstly start by thanking Devon for his time, not just in aiding me with information for this review, but for the fantastic communication and speedy delivery once I'd placed the order through his website. Not one day after they arrived, he'd messaged me on Twitter to ask my thoughts, and make sure everything was OK - you don't even get that with some of the big companies, let alone a professional player!

This was a difficult review for me to keep my own personal opinions out of. These darts are truly a work of art. Whether you invest in the originals or the limited edition - you will not be disappointed. A mixture of high and low levels of grip, combined with a level of technical expertise rarely seen in even the most recent of releases - Trinidad's aim of competing with the likes of Target and Winmau in capturing their own slice of the European darts market seems more achievable than ever!