Gabriel Clemens has taken huge strides over the past couple of years to cement himself as Germany's No. 1. Having broken into the Top 32 in the PDC Order of Merit, it's safe to say the 'German Giant' will be a staple in PDC televised events for a long time to come!

Off the back of this meteoric rise, Clemens was signed up by Target back in March 2020. His signature darts were released just over four months later, in a very similar style to the barrels he used back when he was sponsored by Evolution Darts. These were, as far as I can remember, the first and only set of darts I've ever pre-ordered, having secured my set mere minutes after the public reveal. As a fan of rear grip darts with a reverse barrel taper, these seemed ideal for me - it was an added bonus that they were released in my preferred weight of 21g, as well as 23g.

As a player whose grip is primarily focused towards the rear of the dart, it was important that Target were able to utilise every millimetre of the 52mm barrel, in order to provide Clemens with sufficient grip in order to compete at the very top of his game. 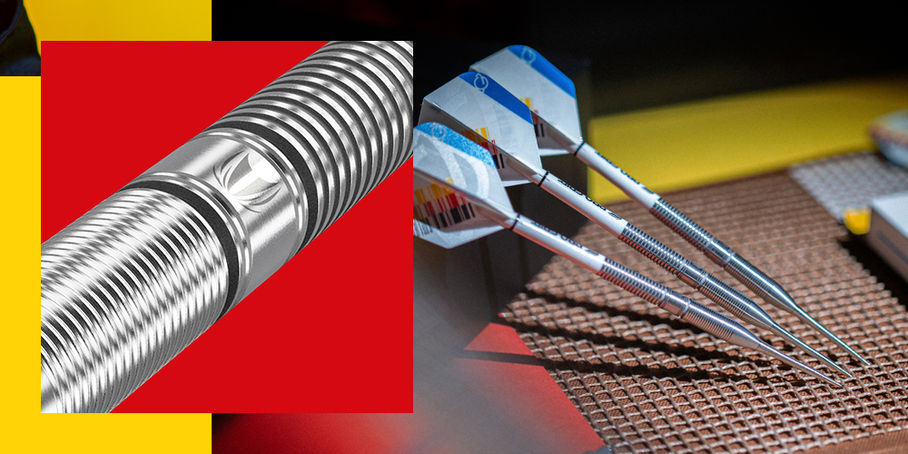 Manufactured by a company not afraid of pushing the boundaries to what is possible, the darts feature unique sandblasted grooves, enhancing the grip while allowing for shallow cuts into the barrel. Since the release of the Gabriel Clemens Generation 1 darts, Target has since replicated this on other sets, including on their popular 'Bolide' range.

The darts arrived in a simple cardboard outer box, with a foam insert securing the darts in place during transport. As a former graphic design student, I'm always intrigued to see the designs companies opt for when looking to promote their darts in a more physical form. The striking white box certainly catches the eye, with the colour scarcely used within darts packaging and promotion. A feature I was impressed with was the handy tab, which, when pulled, opens the top of the box for easy access to the insert within. I personally buy a lot of second-hand darts online, and frequently find boxes torn towards the top, and so I'm impressed with Target finding a solution to this issue, helping to preserve the life of the packaging.

Arriving fully assembled, the darts are good to go right out of the box! The barrels are accompanied by a set of short white ProGrip stems (though the website states these are meant to be intermediate), along with a set of No. 6 Gabriel Clemens signature flights. The darts also come fitted with a set of 30mm Target Nanogrip points - identical to the points Gabriel himself uses. This is something I'd love to see become a standard feature in the future, with more and more professionals electing for machined points, as opposed to the plain silver and black points that come as standard with the majority of player-branded darts. Target professionals Rob Cross, Nathan Aspinall, and Glen Durrant, for instance, all use Target Storm points in their darts - I'd love to see 'authentic' equipment come as standard with player branded darts, and feel that with the Gabriel Clemens Generation 1 darts, Target have a great opportunity to set a new market precedent. 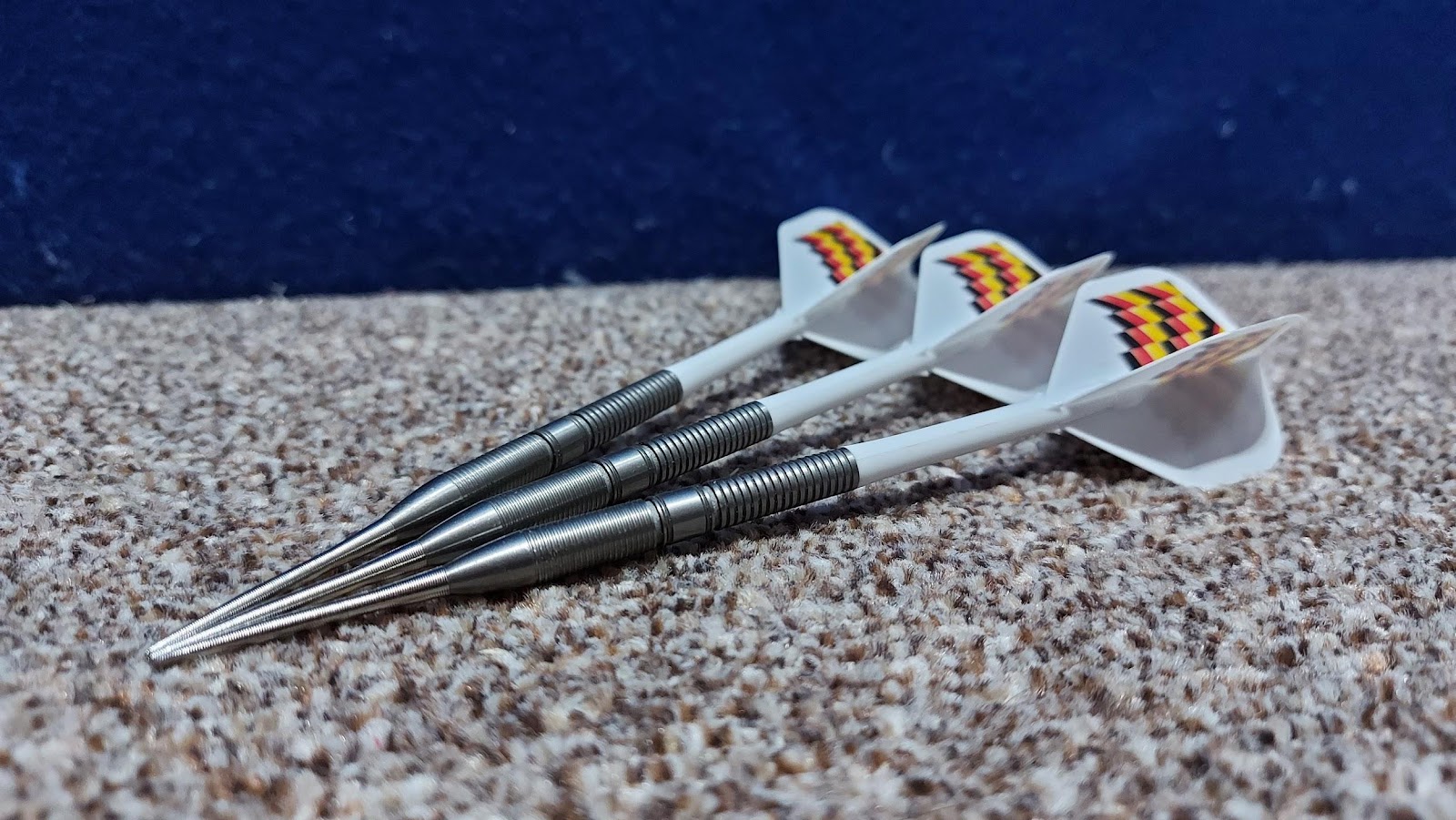 For me, I couldn't wait to try these darts. I'd seen the old Gabriel Clemens Evolution darts in the past, yet with postage prices sky-rocketing, I was hesitant to get a set ordered from Germany. As a player that uses every millimetre of the dart, just as Clemens himself, I felt these could be a set, not just for my own collection, but for actual match use. The rear grip covers 20mm of the barrel up to the stem, with a gap of 8mm before the front micro grip. The micro grip extends to 15mm, with the taper to the point measuring at 9mm.

The rear grip is deceptively shallow - for me, this was the biggest issue. At first glance, I expected the darts to offer a substantial grip, yet I quickly discovered that this was not the case. One possible explanation for this could be the aforementioned sandblasting in between the grooves. This reduces the depth of the cut, as well as retaining more dirt from your fingers, clogging up the grooves further. This drastically reduces the grip available to you as a player. While Gabriel himself, who I imagine regularly replaces his darts for maximum grip, wouldn't have this issue, for an average player such as you or I, this can pose a serious problem, as the sandblasting can make it extremely difficult to effectively clean the barrel.

The front micro grip, while shallower than the rear grip, is intended to be used as a 'support', rather than a primary point of contact - that is to say the darts have been developed with a 'rear-gripper' in mind, as opposed to a 'front-gripper'. I personally rest my middle finger on this section of grip, which locks in place when 'setting' the dart, yet still allows for a smooth and unhindered release when the time comes. With the reverse barrel taper, this section of the grip is well protected, ensuring the front grip will scarcely chip and maximising the longevity of the darts.

The long taper is perhaps my favourite thing about these sublime barrels. Positioned at a shallower angle, the taper allows the barrels to glide past darts already in the board, which further enhances Clemens' already impressive scoring power. The Target Storm Nanogrip points simply extend the taper further, creating a seamless flow from the tip of the point, all the way to the rear of the flight.

The points themselves help to secure the darts to the board, with the long-lasting nano-grip technology grasping the sisal fibres in the board. One thing you may notice about Gabriel is that he has a lot of 'hanging' darts. That is to say where the dart has deflected off of another at an awkward angle. Very rarely do these darts fall out, which is truly a testament to the design team at Target Darts. Certainly, something I've experienced first hand, as these are the exact points (though 4mm longer) that I used in my own darts for well over two years!

"At first I loved them, front weighted and long barrel, but it was a honeymoon period as I'm so used to grippy darts"

(It seems @TwinDad180 over on Twitter shared my view on the lack of grip!)

"but I don't like the real fine grip on my fingers. Feels like the Target Nano Storm just as a barrel."


Despite their flaws, for me, I'm still a huge fan of these darts. The intricacy of the grip, and unique barrel shape - the influence Gabriel has had on these darts cannot be understated. Where with some player darts, you feel they have been tailored to commercial sales these darts you feel have been designed and manufactured with only one thought - to provide Target's latest acquisition with the right tools for the job.


While perhaps they won't be the most popular dart from an amateur player's point of view, for any fan of Gabriel, or any darts collectors, these are a must-have. When fully equipped with his full L-Style setup, these are truly a work of art, and an overwhelmingly enjoyable set of darts to pick up and throw. With the PDC Top 16 on the horizon for the 'German Giant', seeing these arrows on TV could become a regular occurrence! I can't wait to see the heights Gabriel reaches while using these arrows, as he hunts down his first PDC major.

Joe Reid is darts player/fan and independent tester whose other work and fuller reviews can be seen: