Choose Your Weapons: Over The Top again?

DEAN Winstanley has had signature barrels made by A180, Winmau (multiple editions) and One80. They each have elements in common but for his latest manufacturer Dean seems to have gone back to where it all started. Joe Reid looks at Over the Top's latest Superdarts: 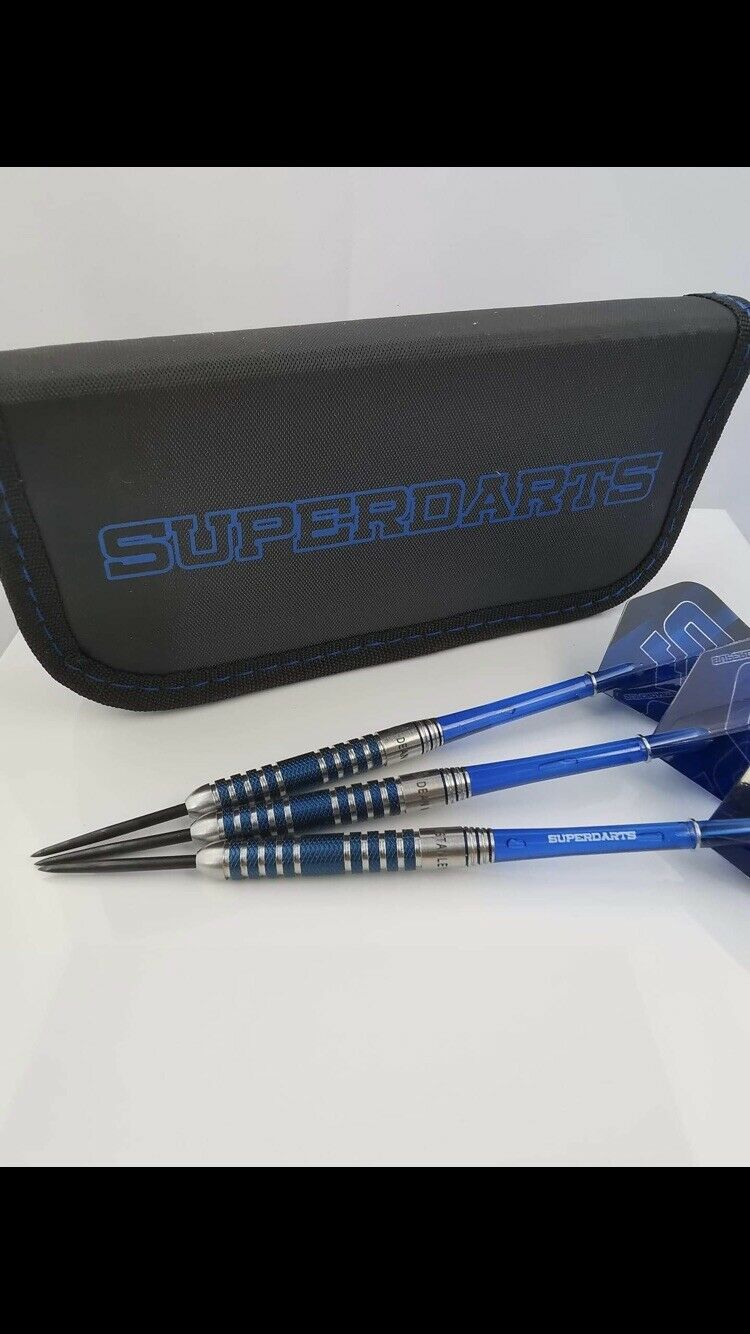 A player made famous for his 9-dart finish in the 2013 PDC World Championship, Dean Winstanley has developed into one of the most unique characters in world darts. His new arrows of choice, developed by Superdarts, pay homage to the barrels used in the aforementioned match against Vincent van der Voort, bringing back the knurled grip favoured by Dean.

A striking barrel, with a unique style of coating - utilising a blue titanium nitride coating overlaid onto the knurled grooves in an effort, Dean informed me, to help them “stand out” from typical knurled darts. This they do, with painted grooves towards the back, as well as a vibrant blue stem and flight setup - these darts are truly a work of art!

The darts come supplied in a stylish and practical darts wallet, perfect for taking down the pub/club for league nights. Inside the wallet features three compartments, as well as the entirety of the left hand side dedicated to holding your darts in place. In the compartments, you’ll find a set of blue Superdarts translucent flights, as well as a carabiner clip and a point protector. Equipped on the darts already is a set of medium blue Superdarts stems, perfectly complimenting the deep blue coating on the barrels.

The darts, for now, solely come in 24g, which feels heavier to throw due to the thickness of the barrel, and the weight distribution (which I’ll refer to later within the review). They measure in at 50.8mm long - around the median length for a straight barrel dart these days, although considerably shorter than the vast majority of darts in the Superdarts range. The barrels are exactly 7mm thick, which is made more noticeable thanks to the knurled grip. The darts are equipped with a standard 32mm black coated point which can be changed to suit personal choice.

The barrels themselves primarily feature a thin knurl, providing the player with a gritty, yet light feel. They are not too dissimilar from Robert Thornton’s darts, produced by Red Dragon. The knurl has been split into three sections, with two knurled ring grip sections on either side of a thicker knurled ring.


Dean, due to his “different” style of throw, required a grip that wasn't “aggressive”, “as that sticks to [his] thumb”.
Another tester was shocked by what he saw as old tech:

" I found the grip surprisingly effective, perhaps knurled darts should not be written off after all...." (Serious amateur player)

One thing that stuck out for these darts was how well they were balanced. For such a heavy dart (and because of the thickness of the barrel, they feel - to me at least - heavier than 24g), at no point along the 50.8mm barrel did it feel uncomfortable to hold them. The further forward I held the dart, the flatter they sat - still landing straight in the board, without kicking out to the left or right. In Dean’s case, he prefers a slightly shorter stem, flitting between short and intermediate when he sees fit, coupling the stems with either standard or kite flights. This moves the centre of balance further forward, suiting Dean’s throw and allowing the darts to lie flatter in the board.

When fully assembled, with the blue stems and flights, there’s hardly a dart that can compare. Truly reflecting Dean’s nickname, ‘Over the Top’, these darts push the limit of what’s possible in terms of aesthetic dart design, while not forcing it. A true work of art, and I for one can’t wait to see these on a TV screen sometime in the future!

As I said just two paragraphs ago, these darts are incredibly well-balanced. From every position I threw from, the darts flew in a consistent arc, landing at varying angles yet never with a lean toward one side. At no point did they feel uncomfortable to hold, never offering resistance to the position I held.

A light, simple knurl - perfect for Dean! While not a particularly aggressive feel, the darts still offer enough grip so as to not slip from your fingers. In comparison to other Superdarts sets, such as the Joker’s or Torpedo’s, the Winstanley’s feel relatively smooth. Ultimately, this is up to the player. For someone wanting a subtle, ‘worn in’ feel, these may be the darts for you!

Out of the packaging, the quality of these darts was clearly evident. Intricate coating and painting had been implemented perfectly to create a stunning final product. I, however, marked them down for longevity. After a couple hours use, I found there was noticeable damage to the coating, chipping away to reveal the silver tungsten underneath. While expected, due to the weight of the darts and the speed they travel to the board, I was nonetheless disappointed.

The darts retail for £47.70, including postage, and are available in the UK direct from Phillip Mundy on Facebook, or through the Superdarts UK eBay page. For the rest of Europe, the darts are also available through the Norwegian Superdarts website. While towards the top end, for a coated dart, the unique styling, molded to the specifications of a professional player, that may transfer to many types of throw, the price can be easily justified.

Thank you to Dean Winstanley for taking the time to answer questions and help us to learn more about the design of these darts.