Having accumulated darts from 21 individual darts manufacturers, it mystified me as to how, out of my 130+ sets, I had none from Quantum up until this review. Despite being still a relatively small company, Quantum has taken massive strides in the past two years to ensure their products can rival those of the biggest brands.

This review will be slightly different from the typical review featured on Darts World. I managed to catch a quick word with Scott Marsh himself to talk about his design, and his own thoughts and opinions pre, and post-manufacture. In this unique 'inter-re-view', I'll be combining my own thoughts, and Scott's expertise to provide a comprehensive analysis into these stunning darts.

Twice a PDC UK Open participant - Scott knows what it takes to truly make an impact into the professional game. Despite having never held a Tour Card, Scott has established himself as a top player on the amateur scene, with countless tournament wins under his belt, as well as multiple wins at the Modus Icons of Darts tournaments played throughout the nationwide lockdown. With consistent match practice against the likes of Martin Adams and Mark Webster, Scott could truly burst into life when competitive action resumes, with his ability seemingly improving every time he takes to the oche!

I've always been intrigued by these darts - a bomb style dart, with a rear scallop? Drawing likenesses to the old Harrows V-Wing darts, as well as the highly sought after Jelle Klaasen Masterdarts, I was very interested to see how a set of darts with a width difference (between the widest and thinnest point) of over 1.3mm would work in a practical sense.

The darts arrive in a simple, cost effective plastic 'blister pack', which compacts the darts, flights and stems into a package smaller than your hand. A small cardboard insert sits within the case, with typical Quantum branding. The darts are visible through a gap in the insert, with the flights sitting above the insert in their own raised section. The barrels are locked together in a simple point protector, with the stems just behind the insert, concealed from view. For those that dispose of packaging, you'll be pleased to know the case and insert are 100% recyclable. A classy touch, contributing towards a greener future.

The darts were developed by Quantum with Scott's old darts, a set of Mike Gregory B&W, in mind. "I bought them for £6.50", Scott informed me, "from our old Kent Youth manager Brian Schofield in about '97/'98". It was this design that was used moving forward, with Scott preferring a familiar feel in his new darts, as opposed to experimenting with different styles of grip as many players do when developing their own weapons of choice.

The front grip is a relatively simple design, with two thin rings separating five thicker, Bristow-esque rings. Deeply cut into the 7.15mm barrel, the rings offer a high level of grip, with the sharper surrounding rings assisting Scott with consistent finger placement, allowing him to fully focus on the task at hand, as opposed to how he's holding the dart. Explaining the similarity in grip between his previous darts and his new darts, Scott explained that he "didn't want to overcomplicate the grip [by] changing it too much." 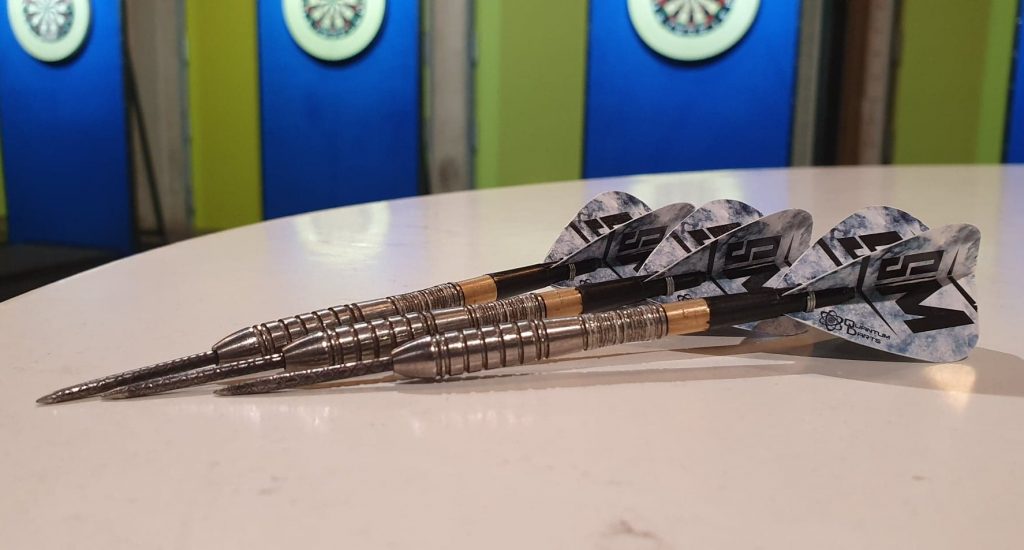 The rear of the dart, unlike the front, provided greater creativity to Scott and the Quantum design team. He was "open to suggestions" as to the design, so long as the balance of the dart was unaffected. This allowed Quantum to have a little more creative freedom within the scallop, eventually deciding on a thinly cut micro-grip. "Initially I was apprehensive about too big [of] a change", I was told, "but Dan [at Quantum] was very patient with me. We spent some time going through a few different rear section styles (3D computerised visuals) until the design encompassed all elements considered [to meet] my needs".

As a rear-gripper, I personally found the darts to be comfortable to throw, with the balance (with the supplied setup) perfect for a player like myself. The scallop enhanced the grip tenfold, as I was able to push against the 'wall' in order to propel the dart. As Quantum rightly points out on their website, "This gives a level of grip which allows you to locate on that specific section, but not overly aggressive that hinders your throw when your arm reaches the release point".

Certainly, Scott and the design team at Quantum had their work cut out! I was granted a look at an early prototype design, which showed just how the design for the rear of the dart evolved over time. Initially keeping the barrel shape identical to Scott's old Mike Gregory darts, Quantum had added grip near the centre. The taper had also been extended slightly, with 'teardrop' cuts added - these, of course, were both reversed by the time they came to general sale. 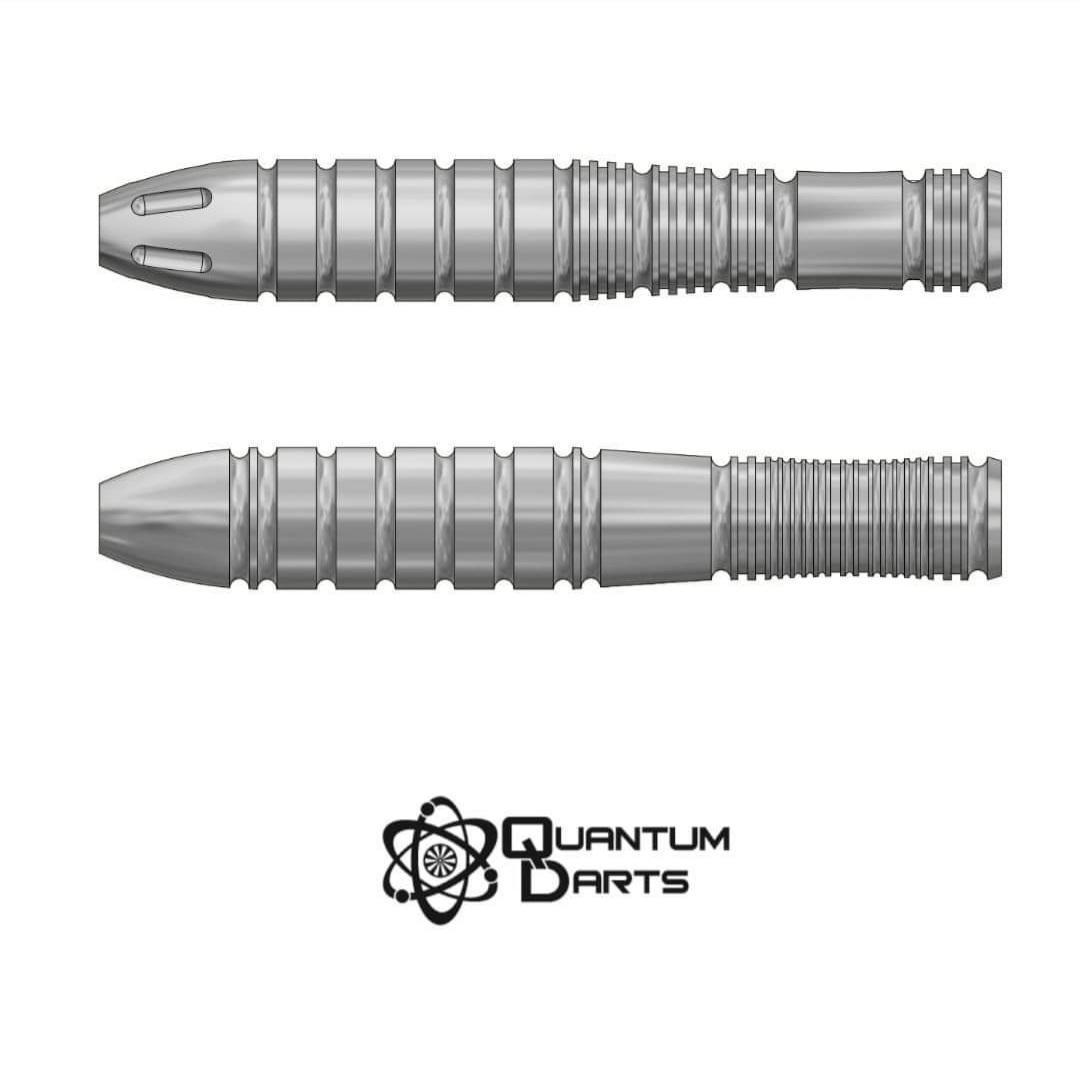 While the darts come supplied with a full set-up of stems and flights, Scott has adapted these to better suit his unique style of throw. Despite coming supplied with medium nylon stems, Scott prefers extra-short nylon stems, accompanied by a brass add-a-gram, silver springs, and his distinctive, signature kite flights. The shorter stems help to move the centre of gravity towards the front of the dart, while the kite flights, with a lesser surface area, help the darts fly quicker to the board. This, along with the add-a-gram, enables the dart to lie flatter in the board, allowing Scott to stack his darts in a similar style to Phil Taylor. He also switches out the points, from the supplied 32mm black points to a set of 35mm MIBGRIP Paragon points, which offer not only greater board grip, but also provides finger grip, without the need for weaker, grooved points.

A huge thank you to Scott Marsh for the help in this review, helping me to understand the intricacy behind the darts, and the rigorous design and development process both yourself and Quantum went through to perfect the design. They are a truly remarkable set of darts, and I can't wait to see them back in action throughout 2021 - who knows, perhaps we'll see them on the PDC Tour in years to come!

-----ENDS------
Grab a set of these darts
More from @JoeReid180
https://joereiddartsreviews.weebly.com