WAYNE Warren is living proof that age is no barrier to success at any level within professional sport. While darts is quickly earning a reputation for being a sport in which the youth can flourish at the top level, with the likes of Callan Rydz and Keane Barry reiterating this point, the recent World Championship successes of both Peter Wright and Wayne Warren in 2020 have shown that experience can, and will still win the day.

It's the arrows of the latter that Joe Reid and A.I.M will be looking at today, with some additional thoughts from some of Darts World's global fans and contributors. A relatively simple design of dart, with a subtle ring grip at the centre and front of the barrel, finished off with a unique sandblasted exterior creates for a comfortable feel, with an adaptive level of grip to the user.

A.I.M - Wayne’s are a very deceptive dart. Initially, with the dull surface and dark colour, they appear somewhat uninspiring. We were a little disappointed that the Warren darts do not have the impact in terms of design, packaging, and accessories that some other World Champion darts do. The supplied setup adds to this impression. The hardcore flights in black and the white aluminium stems compound this somewhat.

However once set up and seen in the board there is a pleasing no-nonsense, functional look about them.

Joe Reid - I can agree with A.I.M on this one. Red Dragon appeared to gloss over the magnitude of Wayne's achievement, with up until very recently, the darts were supplied in the standard Red Dragon 'Essentials' packaging. The supplied setup, with aluminium stems and plain flights, is understandable given that Wayne doesn't use Red Dragon branded equipment to complete his setup, opting for personalised white stems, and Winmau Wales dart flights.

On another note, I'd have very much liked to have seen a 'World Championship Edition' of Wayne's darts. Red Dragon is a company that has always loved to produce special editions of existing barrels, and I'd have liked to have seen Wayne receive similar treatment with his - I expected to see a gold-coated version, to truly commemorate his monumental achievement. 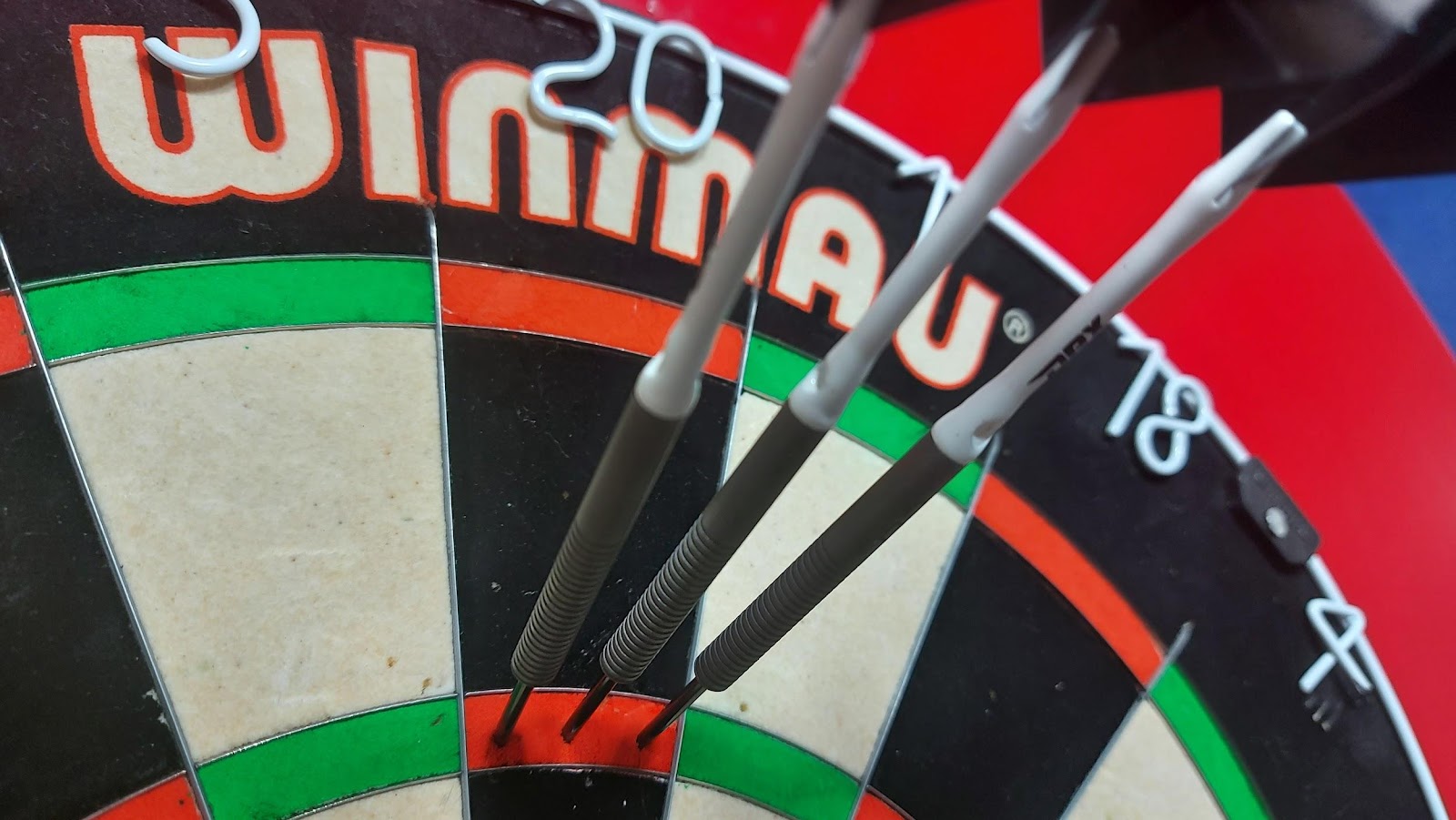 A.I.M - It is [the grip in which] Wayne’s darts come into their own. The shot-blasted exterior ensures a superb worn-in feel from the first minute and after a few minutes, for the dart to warm up in the hand, they are even better. All those who have tested these very quickly became fans of the ‘antique tungsten’ feel that the coating gives.

The combination of a simple ring cut grip, similar to many classic barrels such as Bob Anderson’s, on the lower section of the barrel and a smooth but grippy area, near the stem join, is fantastic.

Another subtle but highly astute touch is the extra ring close to the slightly curved nose. This is popular with quite a few players who rest a finger in this area.

The dimensions also back up that impression of a precision implement that has been tuned perfectly. 6mm is a thin dart but also means many stems will join seamlessly and allow your preference of set up.

Joe Reid - The sandblasting creates. as A.I.M has already alluded to, a worn feel, not too dissimilar to a granite countertop. The dulled down tungsten warms to the hand quickly and effectively, offering a multi-dimensional grip, outside of just the simple ring grip grooves.

The inclusion of the sandblasting is an ingenious idea by the Red Dragon design team, as it effectively doubles the lifespan of the darts. After time, sure, the sandblasting will wear away, which will reveal the tungsten below. What you'll lose with the coating fading, you'll gain in the reveal of the grooves underneath.

It was clear to see the stark contrast between my own personal set, and the test set I was supplied with by the Darts World team. The taper of my own set had taken a battering over the years, and, while the machine-cut grip remained faultless, thanks to the lack of thinner, sharper rings, the coating had nearly faded completely.

Interestingly, the darts feature next to no taper, with a mere 1mm of the 50.8mm barrel allocated to this crucial section. The short bull-nose will result in more deflections for the user, as the barrel has no means of gliding past darts already in the board, instead hitting them head on. If you choose to use these darts on a frequent basis, I'd recommend investing in some tapered points, such as Red Dragon's own Trident, or Raptor GT points. 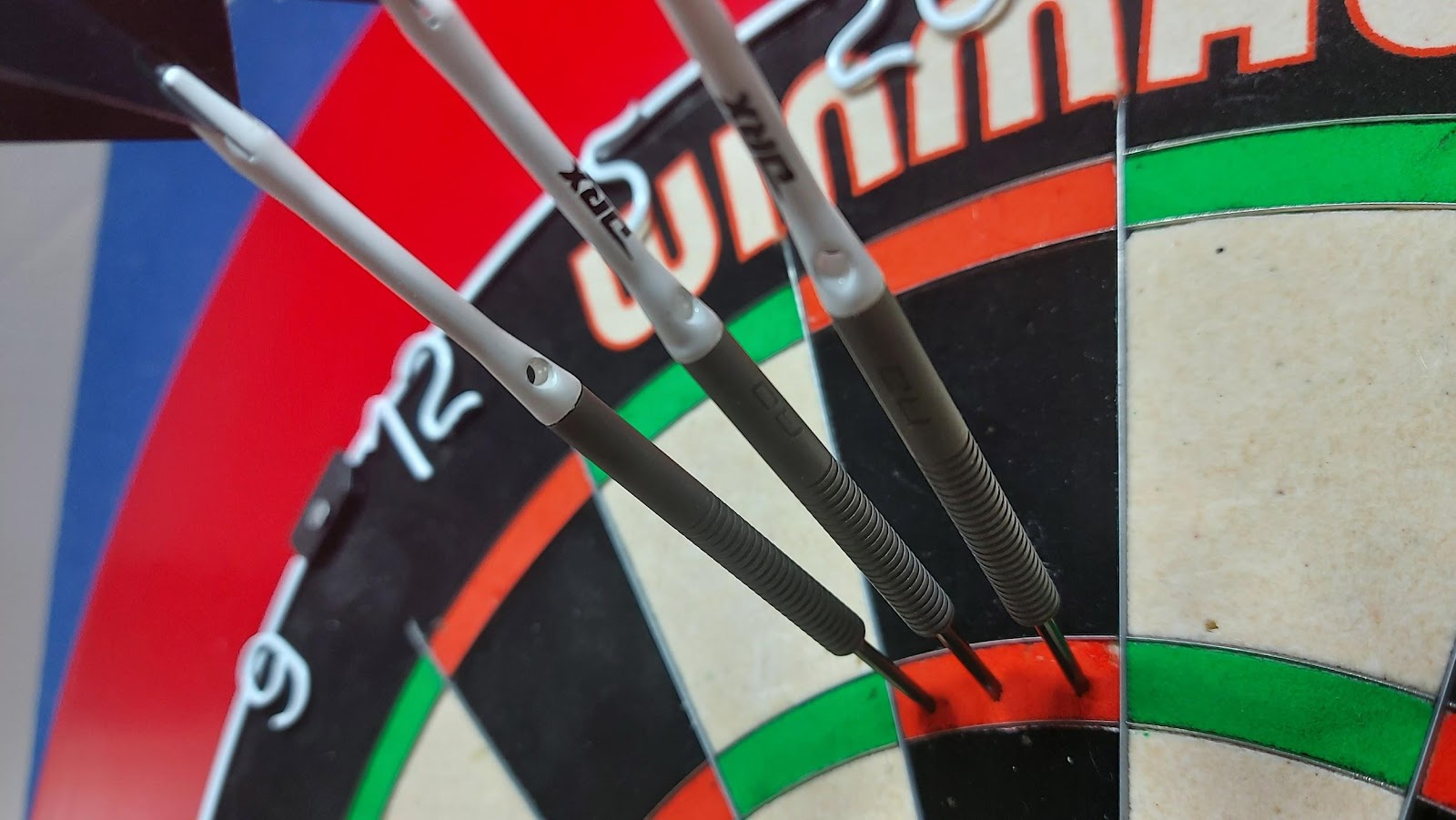 A.I.M collected a few thoughts and opinions from Darts World readers and contributors, in order to assess the general consensus surrounding these fantastic darts!

"These have a superb feel to them, it really feels like you have had them in your case forever…” (Elite Player)

“These are a perplexing dart, they seem to tell you how to throw them if you want success. If you throw simply they seem to force you to be very straight, brilliant if you feel you’ve been drifting or getting lazy.”

“The coating/surface is the key, these are so much better than I thought, brilliant.” (County player)

“Get yourself a high quality but classic set up and these are fantastic. A medium, slightly tapered stem and dimplex standard flight works perfectly!”

A.I.M - We are very impressed with what Red Dragon has managed to do here. The fusion of modern technology with classic design and no nonsense approach has paid off handsomely. The aged feel of the dart prevents what some players describe as the ‘sticky’ feeling of modern, heavily machined, darts when brand new.

Wayne was quite exact about his requirements as he was recreating an old dart that was probably from the 1970s. This means the grip is a classic style but then ‘softened’ or worn-in by the shot blast process

If you are a Bristow type of thrower and don’t need too much grip or if you hold in the middle and use the point junction as a rest point these could very well be for you. If you would describe yourself as a ‘feel’ thrower again these might match up.

Joe Reid - Unlike a lot of player darts, it's clear to see that Red Dragon have designed these with one thought in mind - to provide their man with the best possible equipment in order to compete for titles. Where many player darts seem to incorporate elements to boost sales, the Warrens are designed solely with Wayne in mind.

Despite minimal grip, the darts make the best of what they've got, with the sandblasting creating a grip of its own, comfortable to hold and to throw. On a personal level, the grip was reminiscent of a micro-grip, with very thin, shallow cuts made into the extremely thin 6mm wide barrel. At just 20g, I feel Red Dragon is missing a trick in not bringing out a soft-tip version - something for the future, perhaps…

A.I.M - £35 for a World Champion signature dart of this quality is simply a must-try! If you find they suit you, you can personalize with points, and flight & stem combinations, until you have fine-tuned them to your exact requirements, and still not break the bank.