There has been a trend in recent years to homogenize darts and to identify ‘the perfect way’. This effort is flawed and counterproductive for new or improving payers. An excellent example is in terms of stance:

If you were guided by current thinking you might think that standing in a side-on position was almost compulsory. Phil Taylor, Michael van Gerwen, Rob Cross, and many other adopted versions of this position. Hence the more face-on stance could look awkward or old fashioned. In addition, you may think the short, wristy throw is a thing of the past. Yet a quick look at the most successful players, with very long careers, over many years, offers a different story. 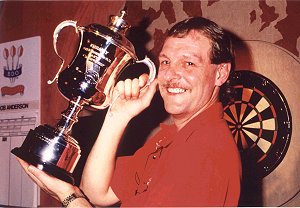 Bob Anderson made his TV debut in 1979 and still featured in the International Darts League in 2007. Along the way, he claimed the World Championship and three consecutive World Masters titles. Anderson was unfortunate enough to have to compete with Eric Bristow, John Lowe, Jocky Wilson, and then Taylor all in their prime. But despite his individual style, few would question his place in the elite of the game.

Overlapping, with Anderson, is the career of another face on, wristy short throw, tall player. Simon Whitlock first competed in the PDC in 2004. In 2018 he was ranked back in the top 10 and featured in the Premier League. Whitlock is one of the few still active, to have played in both BDO and PDC World Finals and hammered MVG in August’s World Matchplay.

A close look at footage of both players reveals many similarities. They are tall upright men in their normal posture. Both lean in with the majority of their weight on the front foot. They get the best results when they level the dart before release. Each is also very still and deliberate in their stance but, once the throw begins, very fluid with the three darts. Both are skilled movers along the oche and their finishing can be unstoppable. In terms of equipment both use mid-length barrels, 50.8mm, medium stems, and a standard shape flight. Both seem to prefer the larger surface area to the flight to get their dart to stand up in the bed. Both use slim fronted darts to allow superb grouping.

The ‘Aussie Wizard’ has been experimenting recently with equipment and accessories. Anderson was also keen to adapt to the times and switched to aluminum stems quite early and adapting his tools over time. Whitlock, 50, could also emulate Anderson’s longevity. Perhaps there is something to be said for their style even today.

So, if you have a wristy throw, or face on stance or any other idiosyncrasy take heed of these great players. Maybe look at your darts, set up or both. Make one small change at a time, to ensure that you can tell what is helpful and what is not, and give each one a decent chance to work in all conditions.

Following the crowd is not always the solution. Remember in darts it's a little like the 'Pirates Code', more a set of guidelines......

Price, Wade and Chizzy also through