The Northern Irishman said at the start of the week that he was going to become World Champion on his daughter’s 18th birthday and achieved it with an average of 87.71.

Duff said after winning: “I’ll never get tired of Neil Duff World Champion, being called out there as World Champion is my motivation to go in and defend it next year. I’ll take that for the next 12 months”.

“Red Dragon have two world champions, that is proof the gear that we use is good because when Red Dragon are making world champions across the formats, its testimony to what they are putting out because its good stuff”

“I couldn’t have done it without Red Dragon, I play with Joe Cullen’s now and they are one of the best set of darts I have ever used”

Thibault Tricole played a magnificent tournament all week in Surrey and started the final in strong fashion, hitting a 65 checkout in the very first leg of the final.
The French Touch raced into a 2-0 lead in sets, as well as a 71 check out in the third set as he hit double tops with his last dart in hand to win the second leg.

The Northern Irishman has shown all week that he is a fighter, coming from 3-0 down to beat Jim McEwan in the Quarter Final and showed this sign of character in the final as he hit double ten in the last two legs of the third set and breaking the Tricole throw to get a set on the board in the final.

The Frenchman continued to play in the way he won the first two sets in the fourth and went 3-1 in front in the final, taking out 80 in two darts to win the fourth set without reply from his opponent.

Duff Man however showed his fighting spirit again in the match and included checkouts of 94 in the first leg, 82 on double tops to break the Tricole throw and 80 in just two darts to go ahead in the set, with the Northern Irishman averaging 107.36 to win the fourth leg and the fifth set.

“I didn’t play great for the first couple of sets, I let Thibault run a mark. But again, when it was 3-2, there it was I was only one set behind, and I was playing horrendously. I had to regroup; I was not going to hand it to him if he wants it, he must earn it”

This showed in the sixth set of the match as the 5th Seed included an eleven-dart leg to win the second leg which could have been ten had he had hit the double eighteen before winning the leg on double nine.

Duff then showed again his ability on two dart out shots and hit 81 on double eleven with his one and only dart at the target to level the final at 3-3.

The seventh set saw the 5th Seed come from 2-0 down after Tricole took out 80 in the first leg with his last dart at double ten before an 86 checkout gave him a break of throw and the second leg, after hitting double sixteen this time with his final dart in hand.

The Northern Irishman went on to win the remaining three legs of the set, and again averaged 107.36 to break the Frenchman’s throw in the fourth leg, as he went 4-3 up in the final.

He then hit 121 on double sixteen using the bull as part of the outshot in the fourth leg of the eight set to force his opponent to throw for the set in a losing position in the match.

The French Touch has also shown unbelievable signs of character after beating Cameron Menzies yesterday from being in winning positions by two sets only for his opponent to peg him back.
After going behind in the Final, Tricole demonstrated his strong attitude towards the game taking the eighth set and levelling at 4-4 including a 62 checkout in the opening leg on double 16 to break the Duff throw. 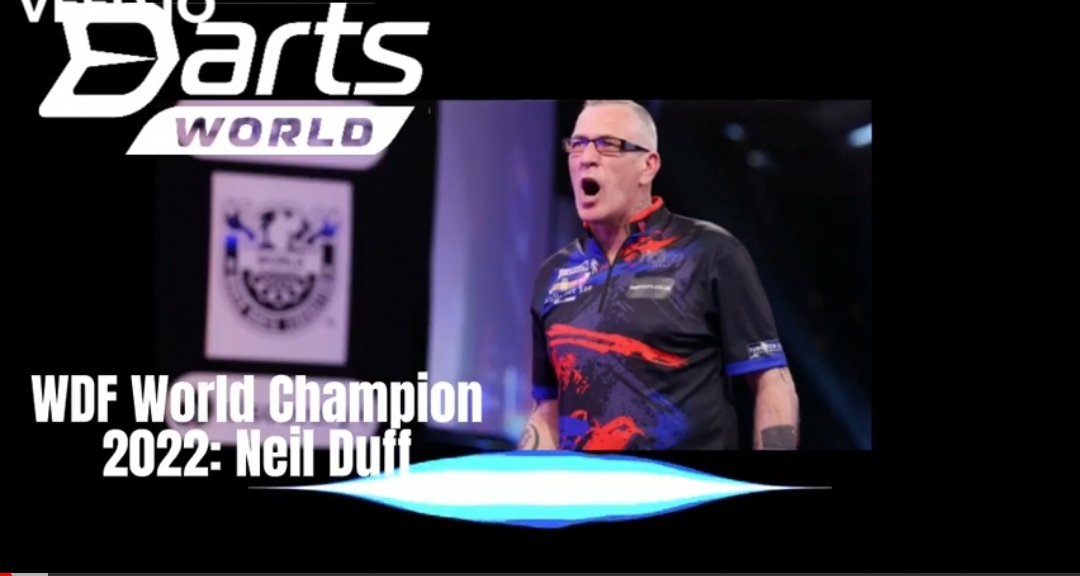 Duff however came back and hit yet another ton plus checkout, this time hitting double tops on a 111 checkout to break the Tricole throw and go on to win set nine on his throw to take a 5-4 lead in the final at Lakeside.

“I was able to knuckle down and start playing, find a better range. If you watch back, you will notice I was smiling when I was playing because I knew that I had the upper hand, when Thibault hit 100s and 121s he was doing it for him, I was trying to get the crowd going because all I had to do was turn round which I loved”

Tricole forced the match into a deciding eleventh set including scores of 180 and 137 to leave tops in the second leg before returning to the oche to hit the target at the first time of asking which broke the Duff throw.

It was the 5th Seed though who came through as the World Champion, winning the deciding eleventh set without reply and achieve the status for the very first time in his darting career. Duff hit double tops to win the third and final leg to clinch the title.

“I was glad it was done; I didn’t want to go to a last leg decider. I stood and took a breath and thought hold throw. I held throw then I broke him, as he had a bad leg so all I wanted was a treble a visit. 15 dart legs are all I need then I’m there”

It was a fantastic day for the Duff Man who came through a real battle in the final, and it rounded off what has been a special week with his best average of 93.75 coming yesterday in the Semi with Richard Veenstra as well as a spirited comeback in the Quarter Final with Jim McEwan.