DARTS WORLD couldn't let a year like 2020 go unmarked. Our sport performed remarkably during a twelve-month period in which much else collapsed. Click on the image below and read or download your own copy of our 100-page, scrapbook-style keepsake edition. 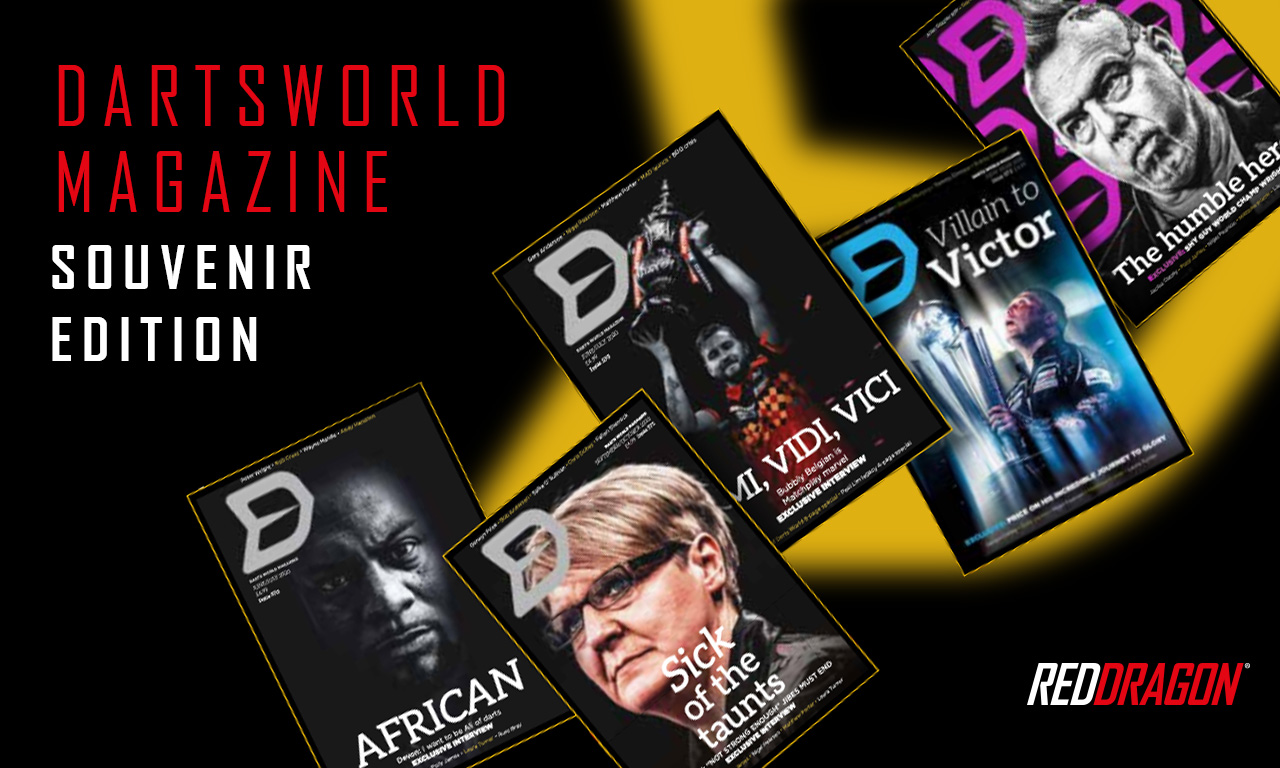 Here our cheif features man. Paul Woodage, looked back, through his own perspective at 2020:

The year 2020 was one like no other. As a new global pandemic swept across the planet like a huge tsunami decimating everything its path, live sport was also washed away by the giant wave.

When Michael van Gerwen lifted the UK Open title on the 8th March 2020 it was inconceivable that we would have to wait almost four entire months until live darts returned to our television screens.

Finally the announcement every darts fan had been waiting for came and the countdown to the World Matchplay in July was on. Despite fans being unable to attend, millions tuned to watch as the curtain to the oche was once again raised.

In what would become a familiar sight for 2020, a new PDC major winner was crowned. The young Belgian star, Dimitri Van den Bergh defeated Gary Anderson in the final to proudly lift aloft the famous Phil Taylor trophy.

In October, Coventry replaced Dublin as the new temporary home of the World Grand Prix. The historic double-in-double-out event saw a brand new champion as Welshman Gerwyn Price overcame a spirited fight in the final from the surprise package of the tournament, Dirk van Duijvenbode.

The flamboyant Dutchman was magnificent throughout the event but couldn’t manage to melt the Iceman in the showdown finale. However, his performances and larger-than-life personality gained an army of new fans and dramatically increased aubergine sales around the world.

As the PDC faced a race against time to reorganise the remainder of the year, it was decided that the Premier League should also be concluded in Coventry. A month earlier, Glen Durrant qualified for the play-offs by topping the league format. Then on the 15th October, his dream came true when he walked out of the Ricoh Arena with his first PDC title after defeating Nathan Aspinall in the final.

The Sportsman Management Company made it a historic treble as Jose De Sousa joined Van den Bergh and Durrant in bringing home silverware to the stable. The sensational Portuguese made it yet another new name on a PDC major title when his name was etched on the Grand Prix of Darts trophy in November.

With just the World Championships left to go, all eyes were on the big three of World number one Michael van Gerwen, reigning World Champion Peter Wright and a player in scintillating form all year, Welshman Gerwyn Price.

Darts lovers were buoyed with the announcement of fans being allowed back in the arenas but unfortunately, that was extremely short-lived. Fortunately, it didn’t detract from the quality on show and hot off the success of lifting the World Cup for Wales, Price had his eyes firmly set on the prize of becoming World Champion too.

Many experts had tipped Price for glory and in a high-quality tournament in Alexandra Palace, he fought his way through the field to eventually defeat his nemesis, Gary Anderson, in the final and become the first Welsh winner of a PDC World title.

Darts World Debate: Should darts be in the Olympics?

As our sport develops into a global phenomenon why should it nor be considered?