DARTS World was surprised that it took quite a while for a manufacturer to see the potential in Ryan Searle's unique weapons of choice. With the launch of Loxley Darts and their signing of 'Heavy Metal', this has finally changed. Joe Ried does a deep dive into the recently released signature dart:

Ryan’s new darts, designed by Loxley’s own Zachary Thornton, are certainly unique when compared to the darts used by the other 127 players on the professional circuit. Weighing in at 32g, Ryan’s darts truly live up to his ‘Heavy Metal’ nickname, providing a literal interpretation to an otherwise rock-music-themed persona.

Arriving in a simplistic, yet stylish plastic outer casing, the darts are secured in a matte black bar case. Already equipped are a set of short black Loxley nylon stems, reminiscent of the L-Style carbon stems that Ryan himself uses. Inside the case is a set of the new Loxley Ryan Searle dart flights, as well as a point protector in order to secure the darts in transport.

The 32g tungsten missile measures 51mm in length, with a barrel thickness of 8mm at their widest point. They come supplied with a 32mm plain stainless steel point, which compliments the striking silver barrel very well. The barrels are made from a 90% tungsten billet, in order to maximise the weight, while keeping the dart relatively thin. 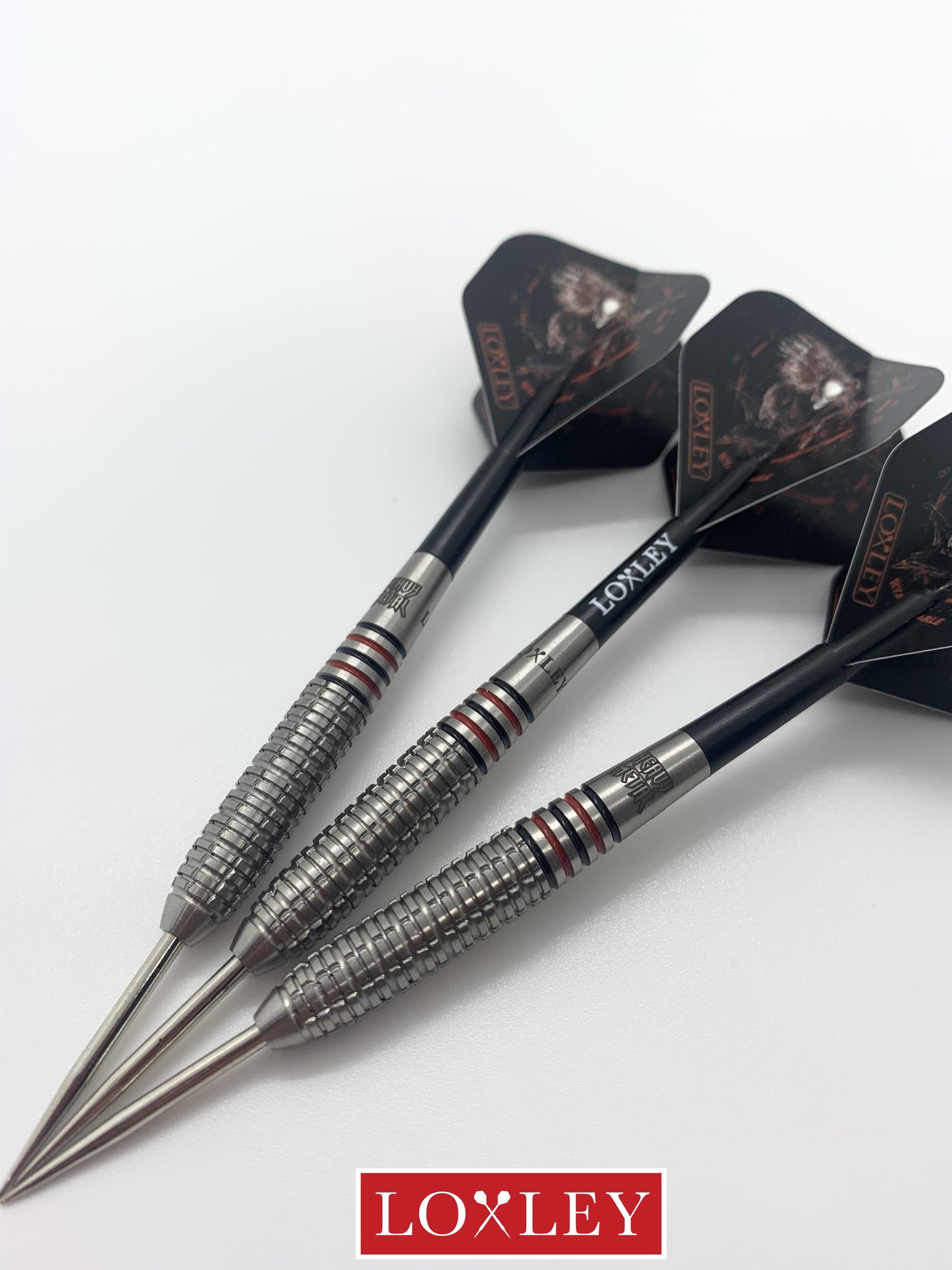 The rear grip is a simple ring grip, with red and black painted groves and drew strong comparisons to those used in many popular designs. This can be used as a focal point for rear-grippers, who look to find a specific, recognisable feel along the barrel to ensure consistency in the way they hold the dart. The central grip is unique to Ryan, with a very interesting feel – reminiscent of the knurling used on Eric Bristow’s later barrels. To describe the grip on these, I found myself watching ‘The Designer’ Zachary Thornton’s YouTube video, describing how he, with Ryan’s input, created these distinctive arrows!

The 'Heavy Metal' arrows utilise a square cut ring grip, which offers a greater level of aggression compared to a rounded cut. The ring grip is split into rings of two, with two rings grouped close together, with a wider cut separating the dual rings. A slightly rounded cut runs adjacent to the dual ring grip, enhancing the grip, as well as creating a familiar feel for Ryan – a key point in the design of the dart.

"Overall I was pleasantly surprised! For such a heavy dart, I usually throw 21g, I found I could throw these with relative ease..."
"Once fitted with longer points grouping was no longer an issue. The darts sat up in the board nicely which may explain Ryan's heavy scoring power...."

One of the first things I had to do with these darts was to repoint them. After a few throws, I found the 32mm points (26mm of which protruded from the barrel) were being buried in the board, making close-knit grouping near impossible. I swapped out the points for the 38mm Target Diamond Grip points that Ryan himself uses, in order to help the darts stand further out from the board, as well as grip the fibres better, resulting in fewer fall/bounce outs.

With no rings or springs supplied with the stems, they became susceptible to damage very early on, with the thicker, heavier barrel clattering into the weaker nylon stems. The same can be said for the flights, with the durable 100 micron Ryan Searle flights struggling to survive the onslaught of tungsten. (A stem protector such as Winmau Wizlocks or L Style champagne rings might be of benefit). 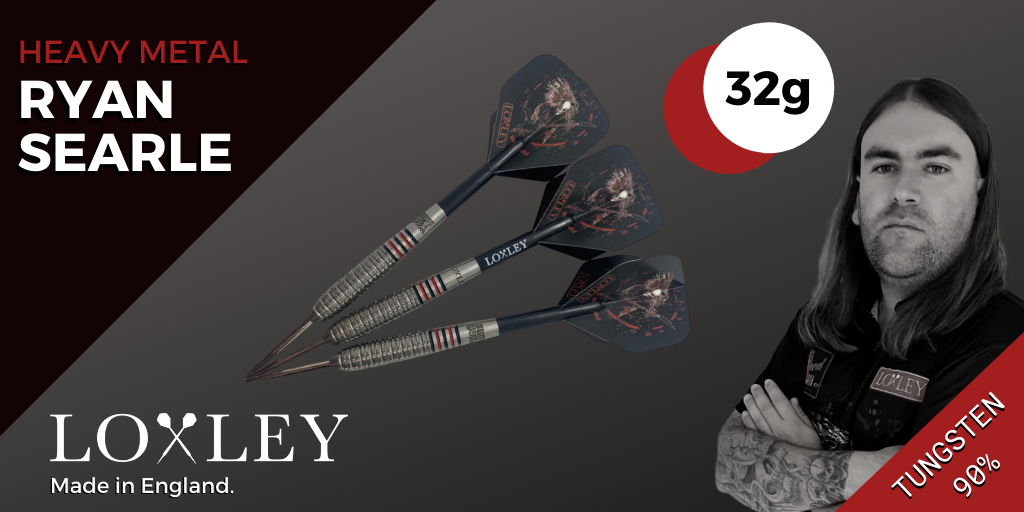 For me, these are the easiest set to give a rating for. In terms of visual effect, these had to be high. With the painted grooves towards the rear, as well as the intricate central grip that seems to catch the light at every possible angle – these are a true work of art! Complete with the stylish Ryan Searle flights, black Loxley stems and silver point, these will certainly turn heads at the oche!

From the rear, these darts have a tendency to kick to the side. From the centre, however, these fly like the bombs they are! A very direct dart, you feel as if you’re throwing a stone into a lake – very little will cause it to deviate from its intended target!

The primary point of grip, while not particularly aggressive (in my opinion), offers a very comfortable feel, similar to that of a knurled dart. For those looking to transfer to a ring grip from a knurled grip (with knurled darts seemingly going out of fashion in recent years), these are ideal, should you be able to handle the weight! The rear grip is a familiar feel, with the majority of players having thrown a simple ring grip dart at some point in their darting career.

There were two faults I found with these, yet both so minuscule they barely deserved to be marked down by one. The first was the central flight in the packaging common with certain packing styles. The flight was distorted slightly in transport, with the wings bent slightly out of shape due to the compression within the package. The second fault I found was that where ‘Loxley’ had been etched into the barrel, a second, faint line of text could be seen above, saying the same thing. Excluding this, the paintwork was near perfection, as well as every cut of the intricate grip – overall, I’m impressed!

The darts retail at £49.95, which for a dart as unique as these, I feel they are well worth splashing out on! With Ryan’s older darts selling for upwards of £100 due to their rarity, these are a must have for any darts fan – be quick, they’re selling fast! The darts are available from Loxley’s website, as well as spare flights, stems and Ryan’s own signature shirts!