Mr and Mrs Winstanley are hungry for more

The determination and innovation of the darts community during tough times never ceases to amaze and delight us.

Here we find a major winning partnership in more ways than one: For many years, they have been two of the most liked players on the darts circuit. With two world finals and a series of tour titles to their name, they too have been a formidable force in the world of darts.

But now Dean and Lorraine Winstanley are cooking up a treat with their catering venture ‘Food On’t Move’ as well as on the oche. 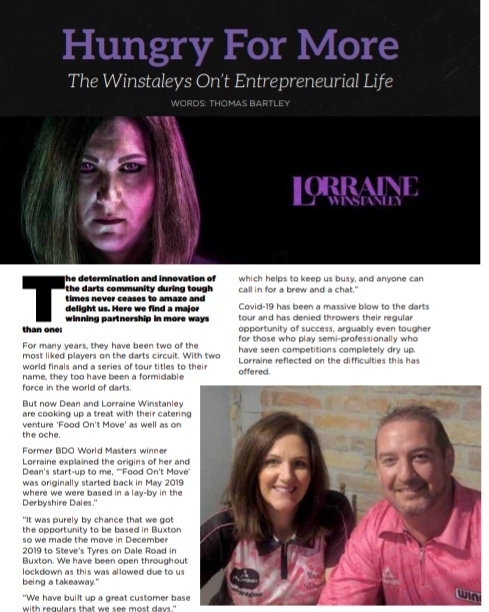 Former BDO World Masters winner Lorraine explained the origins of her and Dean’s start-up to me,

“‘Food On’t Move’ was originally started back in May 2019 where we were based in a lay-by in the Derbyshire Dales.” “It was purely by chance that we got the opportunity to be based in Buxton so we made the move in December 2019 to Steve’s Tyres on Dale Road in Buxton. We have been open throughout lockdown as this was allowed due to us being a takeaway.”

“We have built up a great customer base with regulars that we see most days,” she explained. “It was only when I went back to work in the salon that Dean decided to give our little van a makeover, hence why we started promoting on social media platforms. It now has a new look and a more varied menu which helps to keep us busy, and anyone can call in for a brew and a chat.”

Covid-19 has been a massive blow to the darts tour and has denied throwers their regular opportunity of success, arguably even tougher for those who play semi-professionally who have seen competitions completely dry up. Lorraine reflected on the difficulties this has offered. “I’m certainly looking forward to returning to the game I love. I’ve dabbled with the online stuff and was lucky enough to represent England in the WDF online cup where we came out as overall champions but it’s not the same as playing in person and so I’m now concentrating on being able to get back to it properly.”

Women’s darts has gone through a challenging period, with the drama at the start of 2020 around BDO World Championship prize money giving way to the eventual demise of the BDO and the emergence of a number of organisations and individuals looking to start from square one. But the work of the PDC in providing opportunities through the Women’s Series last year, a landmark event, and the calendar staple of Q-School, as well as the positive signs emerging from the World Darts Federation gives some optimism that the next year will bring good things for the women’s and amateur game.

“Being able to compete in the PDC Women’s Series and Q-School was amazing although a bit daunting as it had been such a long time since I’d had my opponents in the same room!”

“All the events were fantastically well run with all the extra precautions which had to be put in place regarding the Covid-19 restrictions, and the PDC did a great job to get these off the ground.”

As for Dean, he remains hopeful that as darts begins to return to normal, he can pick up where he left off on his quest to return to the PDC tour. He had been playing in a range of BDO tournaments following injury problems and the loss of his tour card at the end of 2016. He told me:

“Of course, it has been a blow not being able to get straight back into the game on the back of Q-School and with the tournaments not being played on the run-up to it, it certainly made a difference, but I’m confident of doing well once the competitions return.”

“My shoulder is not doing too bad and I’ve learned to love the game again so I’m looking forward to getting back into the swing of it all once tournaments restart.”

Darts World and their many many fans will wish this determined and adaptable pair the very best of luck.