IN modern-day darts, a good point is a valuable commodity. Whereas in the times of Bristow and Lowe, it seemed a simple 32mm silver point would suffice, players nowadays seek machined points of varied lengths, in order to find the next level to their game. While some players, such as James Wade or Glen Durrant, use aggressively cut points to enhance finger grip, others, such as Simon Whitlock and Adrian Lewis, use roughly sanded points, to better provide better grip to the sisal in the board, reducing the risk of fall-outs.

Certain players, such as Peter Wright and the aforementioned Whitlock, have come under fire from darts fans for using points which, while serving their purpose to the player, pull out chunks of sisal from the board when removed. This creates an unsightly image to darts fans and players alike, who now have to contend with fibres protruding all over the red and black segments of the twenty. Boardmaker Unicorn has also endured several social media assaults.

It was from this that the subject of this review was born:

On the 30th of September 2020, Matt Brindley put out a Tweet which, unbeknownst to him, would provide the spark that led to the creation of MIBGrip.

Having received no response, Matt set about creating his own points to suit his own needs. He tested various styles throughout the first UK Lockdown, before, in December 2020, forming his own company to sell them from, after receiving overwhelmingly positive reviews from those he asked to test the points.

Now six months on, Matt has expanded the MIBGrip range to three core styles of point, each offering different strengths to truly suit every kind of player. The points have since been featured in televised, and non-televised PDC and amateur darts tournaments, with players such as Scott Marsh, Diogo Portella and Ross Smith having all used their preferred style in competitive action. Each point arrives in a small clear bag, and features a stylish cardboard insert, showcasing the style and length of the point, as well as reinforcing the packet.

For this review, I will be using the three styles of point in a set of 21g Harrows Supergrip darts. I have a slightly aggressive throwing action, and my darts 'stand up' in the board, as opposed to lying flat. All three sets of points are 38mm, and when I make comparisons to other points, it will be a like-for-like comparison (the other points will be 38mm too). My darts are fitted with a set of medium nylon stems, and No. 6, 100-micron flights. I will be using the same slightly used dartboard, in the same conditions, throughout.

At first glance, the Originals reminded me of the stonegrip-style points used intermittently by 2020 PDC World Champion, Peter Wright. With a light, textured feel, the originals provide an aggressive board grip, while providing the player with a subtle finger grip, for those that use the point while setting and throwing the dart.

Where the Originals excel is the unbelievable board grip they offer. The dimple-esque texture of the point seems to bind the point deep into the sisal, while not dislodging the fibres when removed from the board. On average, I found the points to enter the board around 15mm - the deepest board penetration of the three sets I reviewed.

Used by PDC professional Ross Smith, these were the first of the MIBGrip range to be used at a televised PDC event, as Ross debuted them against Callan Rydz in the 2021 UK Open. Another player who put the MIBGrip Originals on the map was Diogo Portela who, at a Modus Online Darts Live League match hit a stunning 180 that left commentator Paul Nicholson 'mystified', questioning whether Diogo had put superglue on his points!

When asked about the points, Diogo said "the points are great", "[they are] really grippy and do not damage the dartboard as other [brands do]." He went on to add that he's "never had a problem with them"! Ross Smith was in agreement, stating that they "reduce the number of bounce outs or darts dropping out of the board", and with every point (pun not intended) vital in professional darts, it can be the difference between "winning and losing a game". 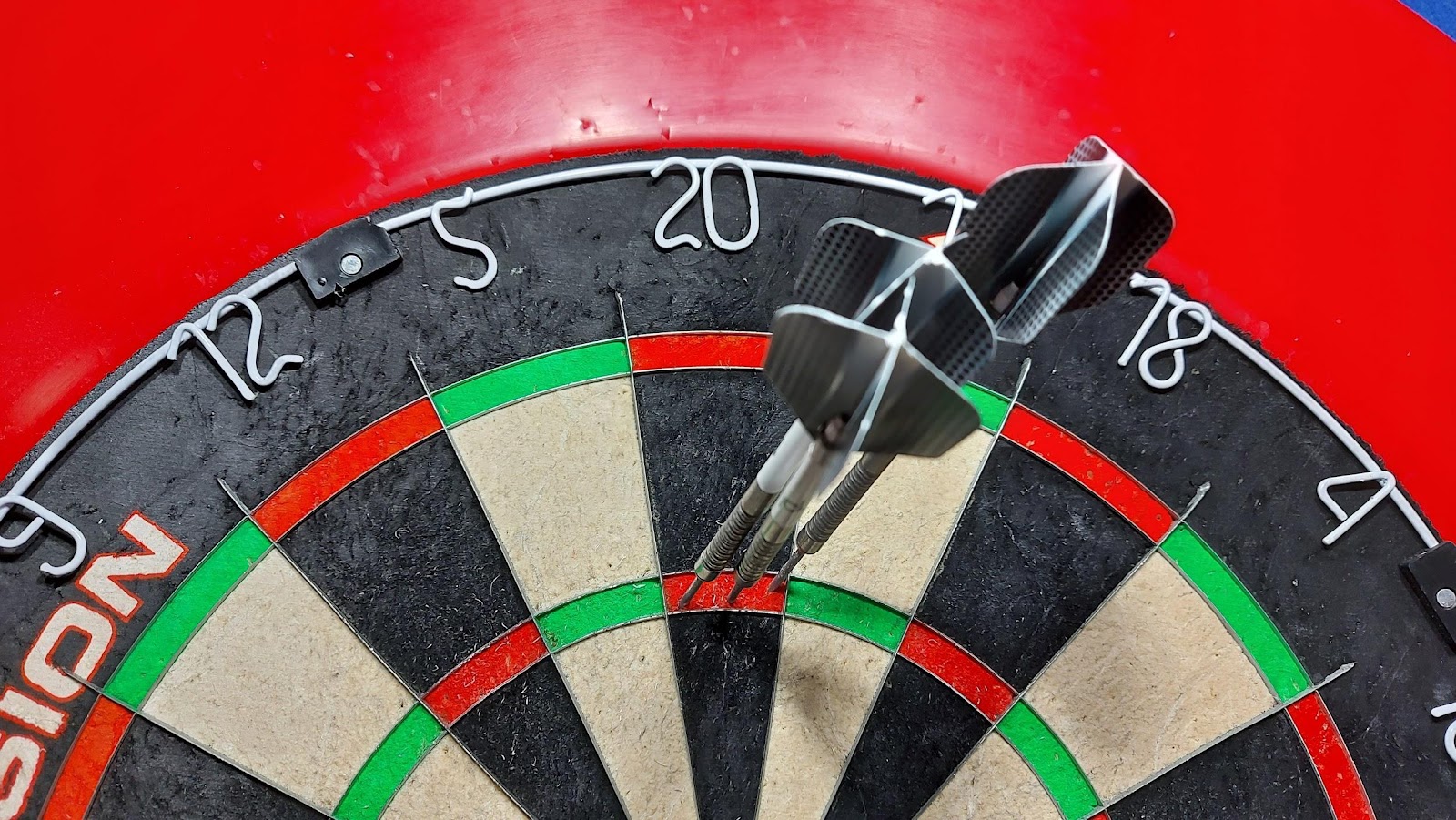 For those that perhaps find the Originals to be a little too aggressive, the Ice points offer a slightly 'toned down' feel, with a subtle nod to the characteristics that made the Originals as successful a point as they are. With greater emphasis on the looks, the Ice appears sleek and smooth, as their name would suggest.

Better suited to a player with a more aggressive throw, the points were created with shallower cuts. Entering the board around 13mm, they leave the darts a little further out of the board than the Originals, and so would be ideal for those using points of 36mm and longer.

Weighing 0.99g on average, they are the heaviest point in the MIBGrip range; They are, however, still 0.05g lighter than the average black coated point of identical length. With an average diameter of 2.28mm, they are also the thickest points in the range, owing to the thinner cuts and markings. 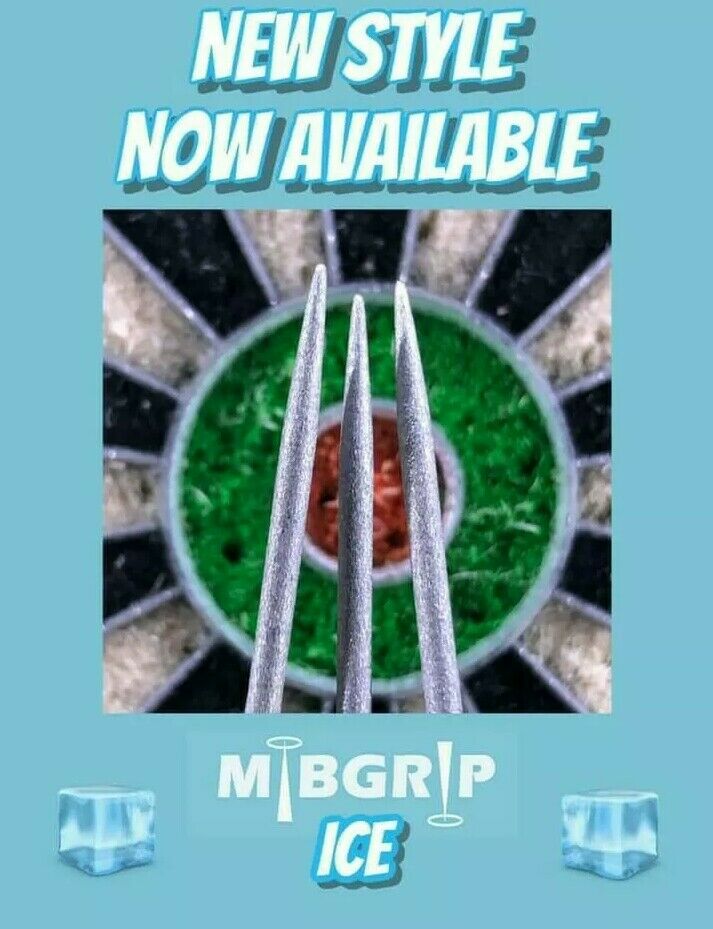 Ahead of the inaugural 2022 Seniors World Darts Championship, many of dart's biggest names have dusted the cobwebs off of the old arrows, and are preparing to return to the big stage. One such player is 1983 World Champion Keith Deller, who will look to earn his second world title, 29 years after his initial success.

As I previously stated, simple silver points no longer seem to cut it, with Keith looking for an alternative to the points he used all those years ago. He seems to have settled on the MIBGrip Ice points, which he feels are the perfect addition to his setup. The visual appeal initially drew Keith in, commenting on the fact that "they look very good" - they'll look even better when they're all in the treble 20!

A stamp of approval from a World Champion! Is there any better guarantee? 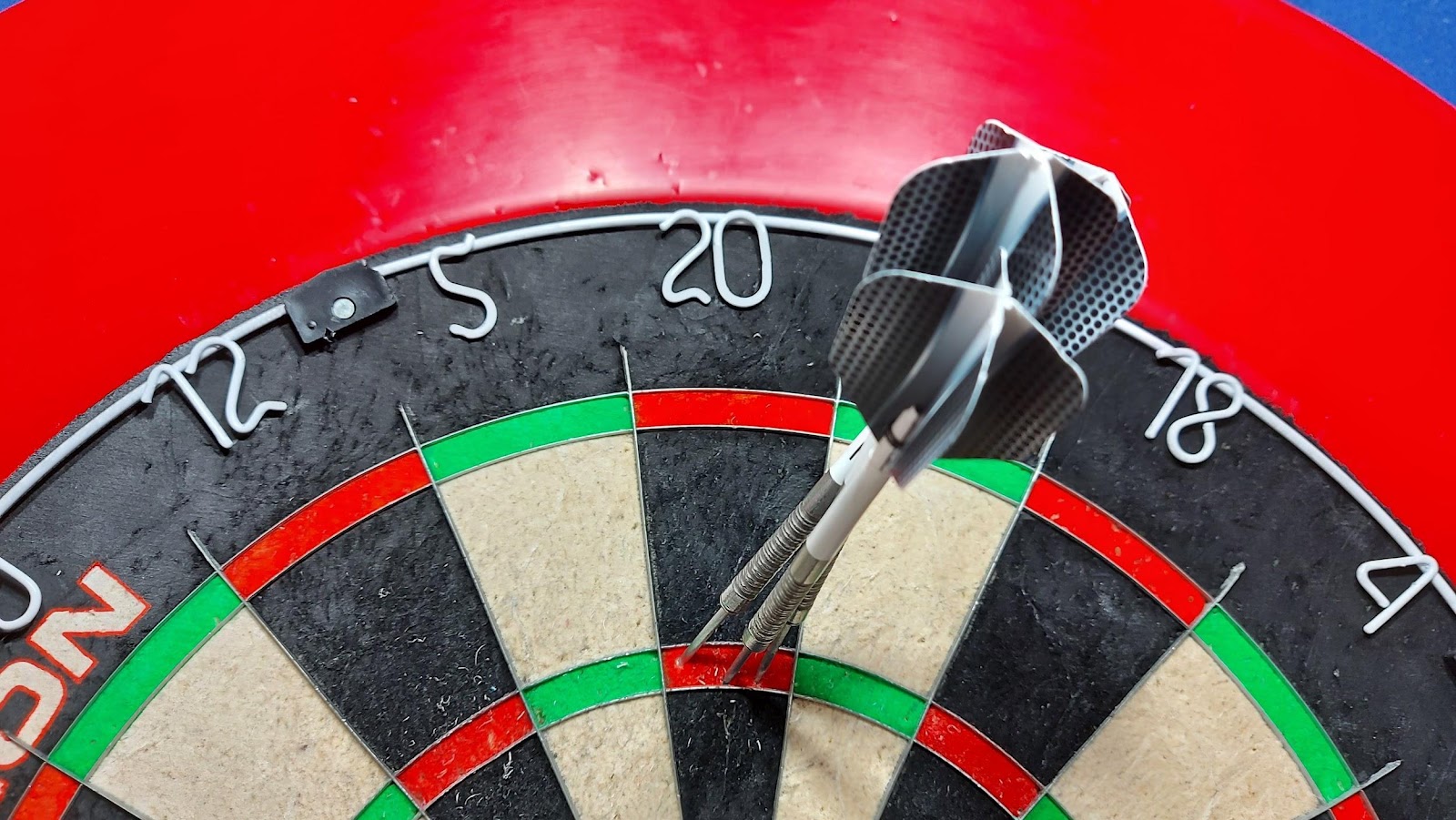 Closely resembling the thin, worn down points used by Michael van Gerwen - the Paragon points have quickly proved to be the MIBGrip flagship product! An aggressively cut point, the Paragon's offer fantastic board grip, coupled with finger grip to rival the deeply cut grooved points produced by some of dart's leading manufacturers.

Designed for players with a 'medium' throw, the points are designed to cause 'no excessive damage to the board' - something I can personally verify as a fact! Despite the appearance of being 'board killers', this couldn't be further from the truth, as after many hours of use, no damage had been done to my board, outside of what was expected from general throwing.

As the thinnest and lightest point in the entire MIBGrip range, they are just 2.17mm in diameter, with an average weight of just 0.86g - though there was some variance between the three points, with a difference of 0.06g between the lightest and heaviest point. A positive to the diameter of the points is that it allows for tighter grouping, meaning that for thick barrel users who prefer a longer point, these will be ideal.

On a personal note, I will be continuing to use these in my own darts! As I use front-weighted darts, the reduced weight benefits me no end, and as my darts have a reverse barrel taper, the 8mm board entry means that my darts stand nearly 26mm out from the board (allowing for 4mm into the barrel), which has resulted in a marked improvement in my scoring just a week after I started using them.

Used by Quantum sponsored player Scott Marsh for some time now, Scott knows all too well how crucial having complete confidence in your equipment can be. He informed me that he's "been using MIBGrip Paragon points for around four months now and I wouldn't [use] any other points! They provide finger grip along the point and grip in the board the best out of any other point on the market by far (without ruining the board!)". 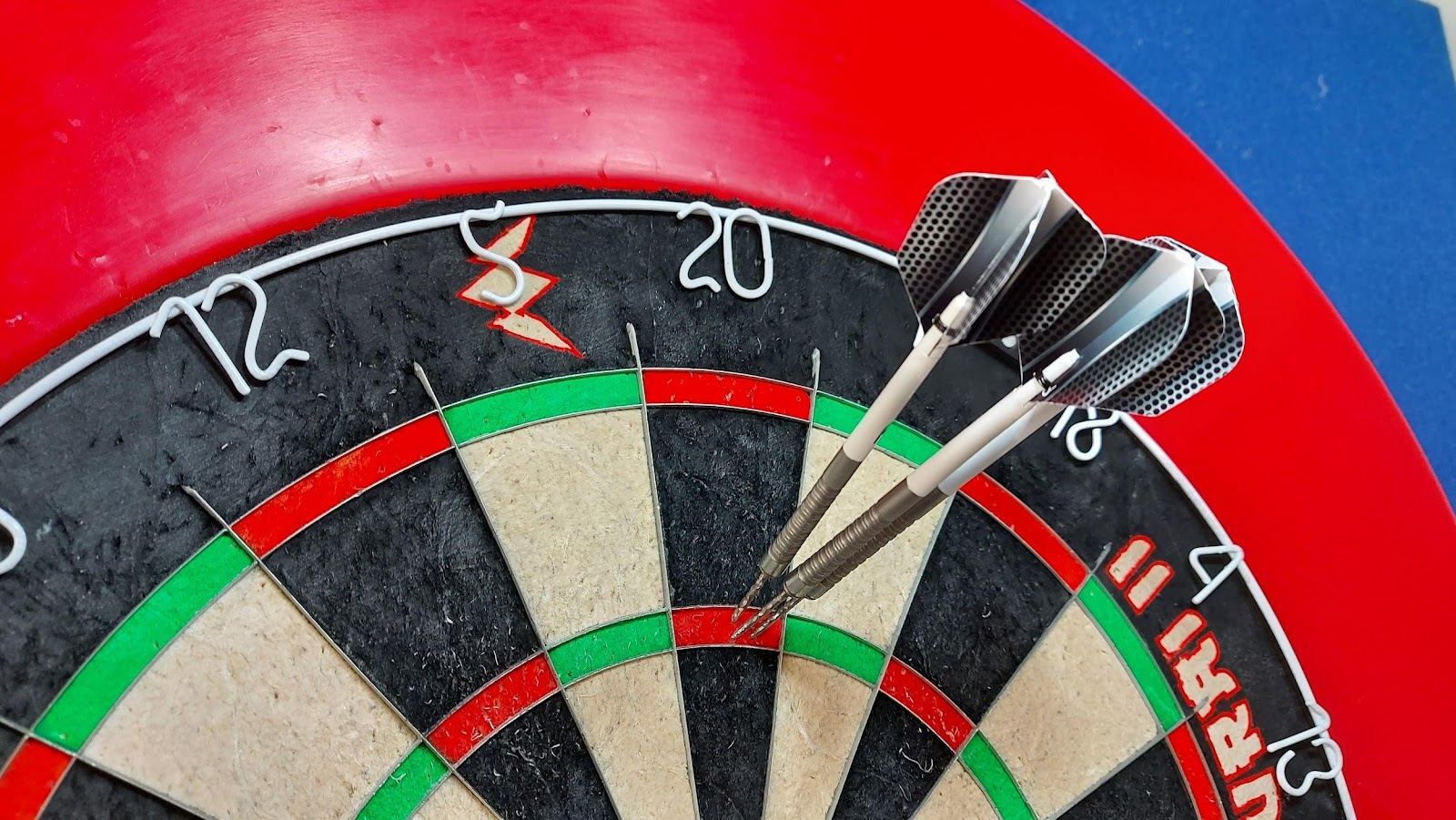 So there you have it! I've written a full price list below, should you wish to take a look. All prices exclude postage and packaging, with all points being sent through Royal Mail First Class.

A huge thank you to Matt at MIBGrip for sending these out. Really enjoyed taking a look at the points I've seen so frequently on my Facebook timeline! Thank you as well to Ross Smith, Diogo Portella, Scott Marsh and Keith Deller for the insight into these points.

I honestly cannot rate these highly enough - they are a must-have for any and all darts players. I'll be continuing to use my set of Paragon points for the foreseeable future, with talks already underway on getting some custom grooved Paragons made!

Check out the links to the various MIBGrip Social Media pages and take a look at the fantastic range of products they have on offer.

(*All prices exclude Postage and Packaging. Message MIBGrip to place an order.)