The ‘Proud Amateur’ tradition runs through many sports and across the generations. Whether it’s a separate system with local, regional, national, and international systems, such as in boxing, or mixed within an overall system, including professionals structures, such as golf or cricket. Why should darts players not be “Proud Amateurs”.

Steve Brown of MAD (Modern Amateur Darts) enthusiastically advocated this in a recent conversation with Darts World magazine and as the ‘Official Voice of Darts’ for almost fifty years it’s hard for us to disagree.

MAD is planning for ‘Christmas’s future’ and Steve’s vision includes that of players who excel in the more traditional/grassroots areas of darts such as Super League and County to have a pathway to recognition and can be proud of managing to combine excellence in their chosen field with family and other commitments. He stated:

“Not everyone can afford to commit to the modern professional route” “MAD wants to create a place where “Proud Amateur” dart players have a realistic, viable way to enjoy the game and achieve their own goals”. 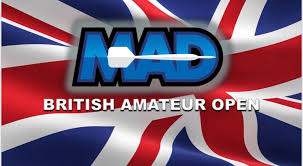 MADs recent announcement of more ‘major’ events in addition to their nascent local and regional system and the 4 national MAD majors:

• The Great British League Championships – This is the culmination of the MAD Local League System, featuring the 16 Super Regional Teams playing off for the title as well as a £10’000 Prize Fund

• The British Amateur Open – A 3-Stage Event, with qualifiers at Regional and Super Regional Level, and the Best 64 Players entering the National Finals. A £30’000 Prize Fund is played for, with all 64 Finalists receiving Prize Money and the Champion receiving £10’000.

• The MAD Golden Gauntlet – A 30-Player Invitational Event, featuring Champions, Icons, and Wildcards. A randomly drawn, quick-fire, last man standing event, starting with 2 players completing a leg of 701, and a new player joining once a leg has been completed. Once the 30th Player has entered, the winner of the last leg claims £10’000

In addition to the more conventional system, that these event form part of, MAD’s MMA like ‘Belt system’ is off and running with bidding underway for the titles unveiled so far. The initial reaction has been superb and surely the system will continue to thrive.

Broadcasters and other media should flock to such quick turnaround events with almost every day producing possible stories or controversy in the future. The MADfather added:

“We want to make amateur darts part of the daily sports conversation in the media, but more importantly in every pub and workplace”

MAD are also hoping to export their concept and structure to other nations where darts has a strong following. The Netherlands appears to be a prime candidate for an initial partnership and there are many more nations where participation in the sport is growing rapidly.

What about those with the ambition to go further. ‘Proud Amateur’ can often turn into aspiring professionals if the conditions are right. MAD have added a new route for those who feel they have what it takes:

The MAD Pub to Pro Masters offers a phenomenal opportunity with the highest-ranked player in each region  playing off for a package designed to give them every opportunity to gain a PDC tour card and succeed on the Pro Tour:

• 1-year Winmau Product Deal, including having the Champions Darts designed

MAD has outlined an entire structure for the grassroots of our game and appears to be well on the way to making it a reality. A fully developed calendar of league, open and regional darts combined with major events of all types and regular ‘one-off’ events to keep us all talking surely this is what “Proud Amateur” darts players always wanted?

By Christmas, we could be looking at a new “Modern Amateur” World champions, major champions,  and a whole host of national and regional belt holders in every category imaginable.

Something to be proud of? I should think so.

Regional events for boys & girls with a spectacular climax

How to triumph at Q-School