WIDELY-recognised as an important part of the revolution of darts, Dennis Priestley was a pivotal figure in changing the sport into how we know it today. In the 90s the game of darts was changing and about to go through a historical period that would eventually propel the sport from a pub pastime into a global attraction.

It was well documented that in the late 80s a pressure group called the Darts Council was formed consisting of the top players in the game and their agents. Concerns were rising by the lack of television coverage darts was receiving. In total 16 players pulled away from the BDO to form their own organisation known as the World Darts Council. As many had turned professional during the 80s the sole intention was to prominently bring the game back to television screens and generate more prize money. The Yorkshireman was one of the founding members of the WDC which would eventually turn into the darting juggernaut we now know as the PDC.

Recent circumstances with the Covid-19 pandemic have meant that Matt Porter and co have had to steer the ship through some very choppy waters. Always measured in his response, the calm giant Priestley admits:

“What the PDC board have done in recent years has been excellent. There is more money involved now and it’s on a par with snooker. “I think they have done extremely well under the circumstances.

"Obviously, it was important to carry on with the calendar as that brings in a vital revenue from Sky but they will miss the money they generated from bums on seats. “They have some set aside so can ride the storm for the time being.”

Sadly Priestley lost a very close friend to the virus earlier in the year. Trevor Jones lost his battle with Covid-19 in April and, to the Priestley family, he was much more than just a driver. He was a very dear friend.

“It was devastating to receive the news. He was a great friend and always a constant support. I probably would have retired much earlier if Trevor had decided to give up driving me. I really miss him and it’s so important to have that one constant person you trust by your side.” 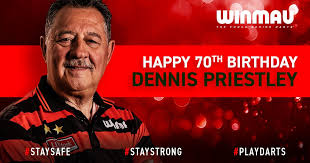 The Menace has had his own well publicised health worries. He was diagnosed with cancer in 2007 and had to have his prostate removed. Now he enjoys quality time with his family and the ex-World Champ shares a hobby with the current one, Peter Wright. They both keep chickens. He added: “I regularly nip down the back of the garden to collect the eggs with my two-year-old granddaughter, she absolutely loves it.” Recently turning 70, the Mexborough man still takes a keen interest in darts although admits to ‘flicking back and forth’ as opposed to being an avid viewer. He continued: “I do tend to channel hop but I keep an eye on what’s going on. I enjoy watching good darts and different styles, players such as Adie Lewis and Michael Smith.

“I was delighted to see Dimitri van den Bergh win the World Matchplay as I worked with him 18 months ago at an exhibition and I found him to be a really nice friendly lad, huge talent too. “It’s great to see other nationalities coming through and winning big events. Krzysztof Ratajski is a player I like and Mensur Suljovic too. They give the PDC a strong European feel.”

Priestley takes a strong interest in other sports too and in particular follows anything his country are involved in.

He added: “I always follow England no matter what it is but I do enjoy cricket and soccer. Barnsley are my local team but I have followed Manchester United for years, however when they meet I have to go for Barnsley.” Asked whether he was ever interested in management, the response is a firm no. However, it’s a shame The Menace doesn’t appear on our screens as a pundit.

He said: “They never asked me. Maybe I am not eloquent enough with my Yorkshire accent. But if they asked me in the morning it’s something I would love to do of course.” Having had such an illustrious career, Priestley was also sad to see the demise of the BDO, adding:

“Olly Croft should have taken the million that Barry Hearn put on the table that time to buy the BDO out."

“I was at an event with their current champion, Wayne Warren in February at the O2 and it was a day before the deadline for his winnings to be paid in full but sadly he never received it.”

Since Fallon Sherrock’s heroics in the Ally Pally last year, the rise in publicity for Women’s darts has rocketed. It’s something Priestley is pleased to see happening and he thinks that the Women’s Series in Barnsley was great for the sport.

He added: “When I was playing there were some extremely talented female players. The likes of Linda Batten, Mandy Solomon and even Deta Hedman were around back then so the level has always been high and it’s good to see the women getting the opportunities to qualify for the big TV events.”

So what now for the Yorkshire legend? Dennis concluded:

“Family is very important so spending as much time with my wife, four children and two grandchildren will always be my priority. “I do like to keep active and before lockdown I was doing up a house with roofing and brickwork. I still keep in touch with the lads and am available for exhibitions".

“Last year I was fortunate enough to work in China with John Lowe and was also with him and Bob Anderson in Tenerife back in March. I hope to carry on doing a fair bit on the exhibition circuit when things get back to normal as it’s something I always enjoy and great to catch up with the lads.”

For now, Priestley is enjoying semi-retirement but if Sky or ITV just happen to be looking for a guest pundit, then he would very much welcome the call.