The Darts World Years 1987: Batten and Burksfield Reach 100 Not Out!

To this day 100 not out in terms of county caps is a sought after achievement. Indeed, Darts World is aware of least one very successful player whose only regret about pursuing a PDC career is that he was left in the nineties. Notice that Linda Batten is named first and that reaching the milestone is treated equally and without favor.

Surrey collecting the County Championship is also covered above, with them finishing on a high note. The confirmation of two tabacco related sponsors as the main sponsors for the following years demonstrates both darts' dependence on such sponsorship, akin to betting today, and that it was still considered worthwhile to the sponsors to back non TV events.

With these ambassadors you're spoling us

Candelabra in the Wind

Bobby George on a life in darts 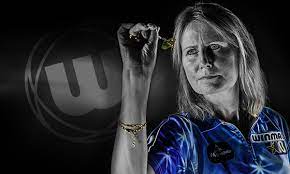