The Practice Board: Games to break the monotony

THE PRACTICE BOARD is keenly aware that constant repetition, especially alone, and too little variety can lead to both boredom and disillusionment with the game. We are therefore always keen to look at any product that might provide some light relief whilst still exercising the arm, the aim and the interest. Here Joe Reid looks at some great game you can try with Dartboard Overlays:


A company I've seen many times on both social media and eBay, I've always been intrigued by the products 'Original Dartboard Overlays' have to offer. As a player that puts many frequent hours into the practice board, I've always looked for new and interesting ways to help spice up the time I spend perfecting my personal game.

'Original Dartboard Overlays' offer, as their name suggests, packs of overlays, designed to "improve accuracy on the board, and mix up your practice routine in a fun way". Most packs contain two overlays, as well as an instruction leaflet. The packs also come with a set of dartboard themed flights, and some pins for securing the overlay on top of your board.

I was lucky enough to have been sent three packs of overlays, which I will share with you over the course of three separate reviews on the Darts World website. Firstly, I'll be starting off with 'Games Pack 1'.

The pack contains two games, as well as an instruction leaflet, score-sheet, and the aforementioned flights and pins. 'Games Pack 1' features 'Golf Darts', with 18 'holes', designed to be played on your own, or competitively, as well as 'Pool Darts', in which you aim to 'pot' all 7 of your coloured balls, before moving on to the black ball to win. 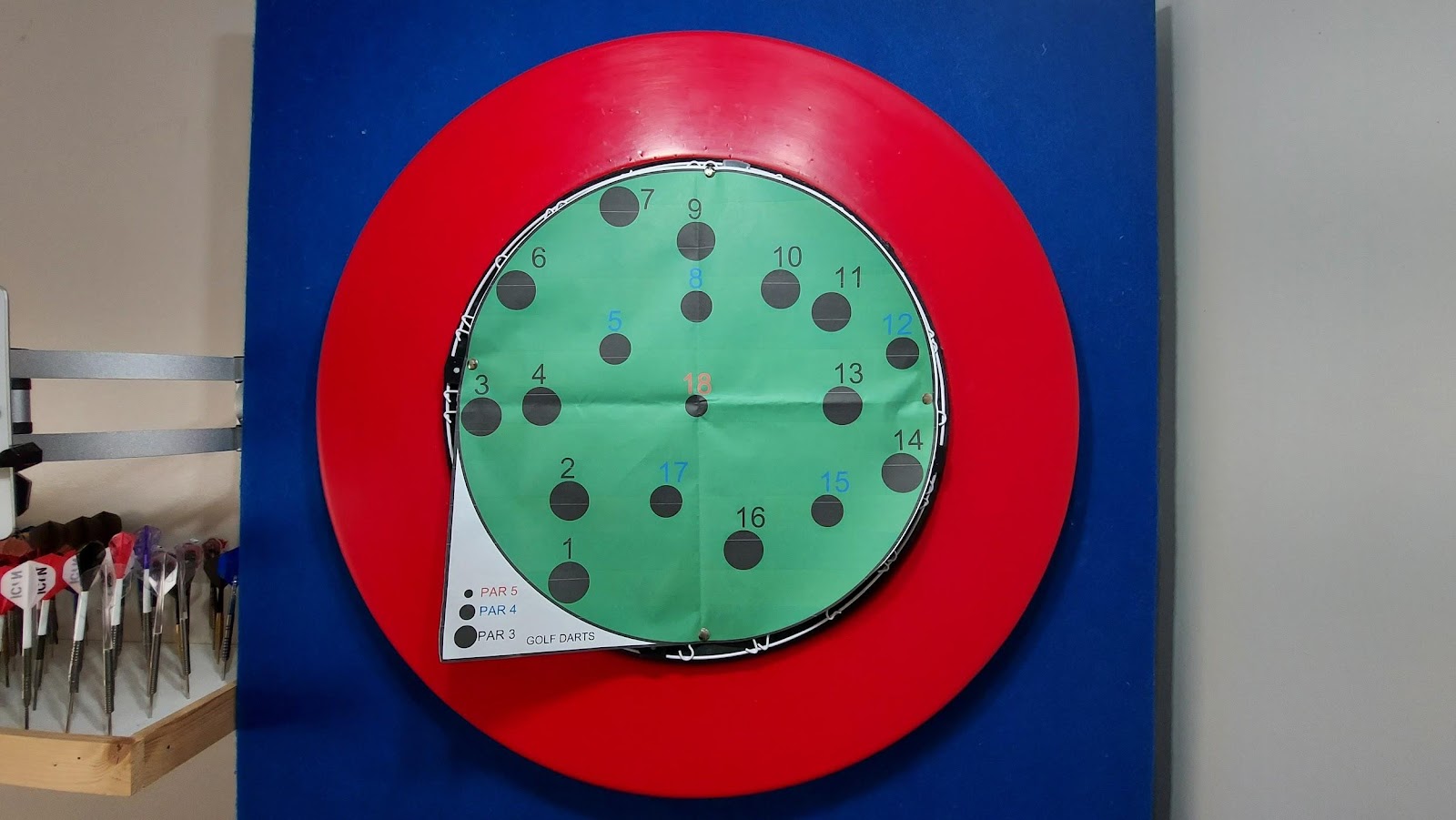 This, for me, was perhaps the most enjoyable game for me out of the six I was sent. Each 'hole' has its own par rating, with a course par of 61. The aim is to hit each number in as few darts as possible, before moving onto the next number. Rather than randomly placing the holes around the board, the holes are strategically placed with the intention of the player being able to move around the course, just as you would at a real golf course.

While I accidentally disregarded the setup instructions - whoops! - the overlay still sat perfectly over the board, with the pins holding it securely in place. Despite being folded during transport, I found the creases practically unnoticeable while throwing. The colours were clear and bright, allowing me to easily distinguish between the eighteen holes and the pale green backdrop. The numbers above the holes were coloured according to their par rating, and while I liked the idea, I found that for the par 4 and 5 holes, the blue/red seemed to blend into the green backdrop, and so personally I feel that different, darker colours should be considered. 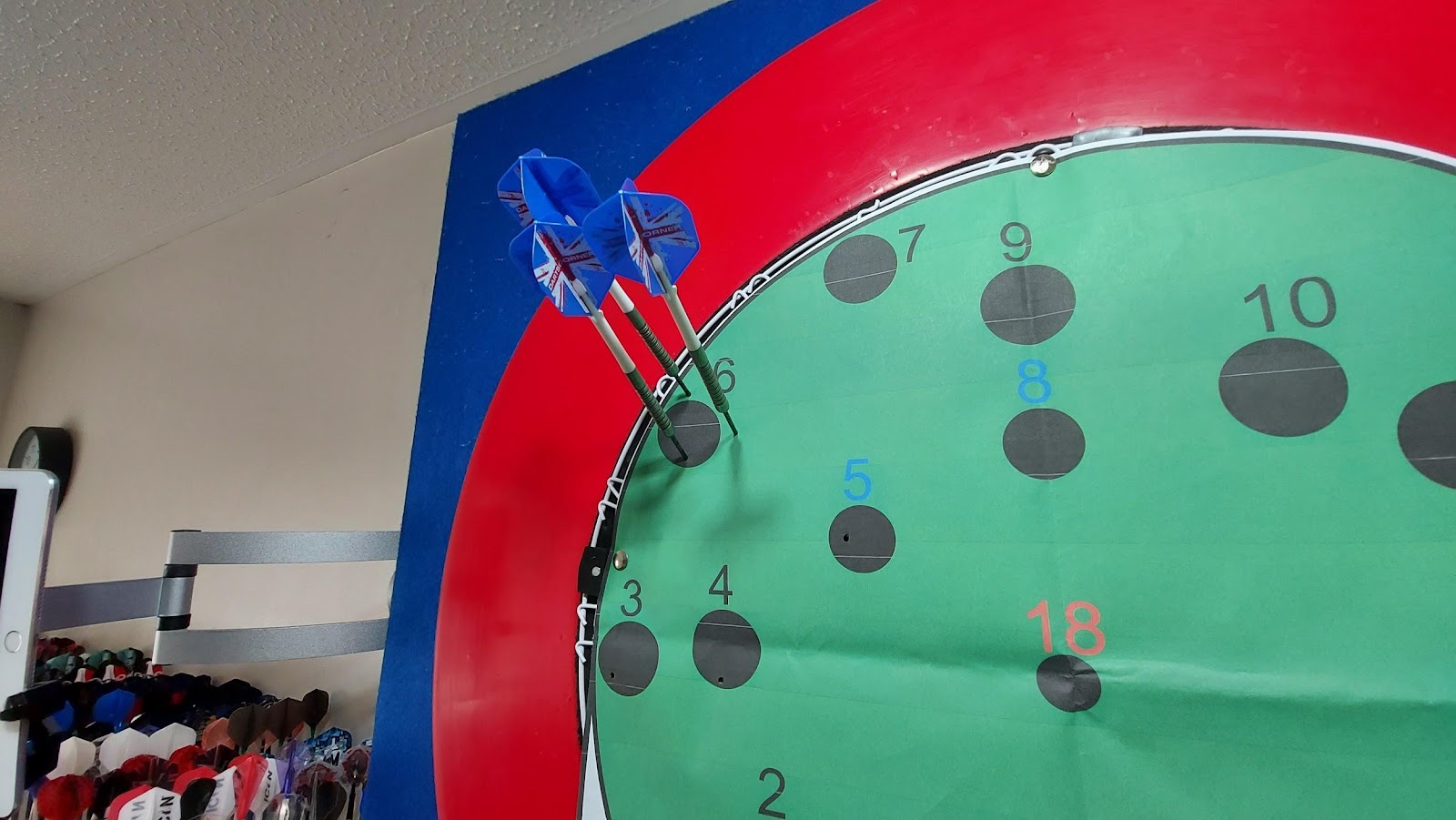 A complete run through the course took me around five minutes to complete, with my first attempt earning me a score of par 39 - 22 under par! The scorecard was easy to use, yet as a non-golf player, I failed to understand the meaning of 'in' and 'out' in relevance to the game. The scoresheet allows for a game of up to six players, or six individual attempts if you decide to play solo. I'd recommend photocopying the scoresheet to allow for extra attempts, or perhaps laminating the scoresheet, and using a thin-tip whiteboard pen to record your scores.

As expected, damage was done to the overlay during use, as it is made of paper. Regardless, the overlay will allow for an estimated 50 uses - this works out to only cost you around 4p per use! Despite the small holes, the damage is hardly noticeable when throwing, allowing you to continue your focus on the elusive targets in order to beat your personal best. 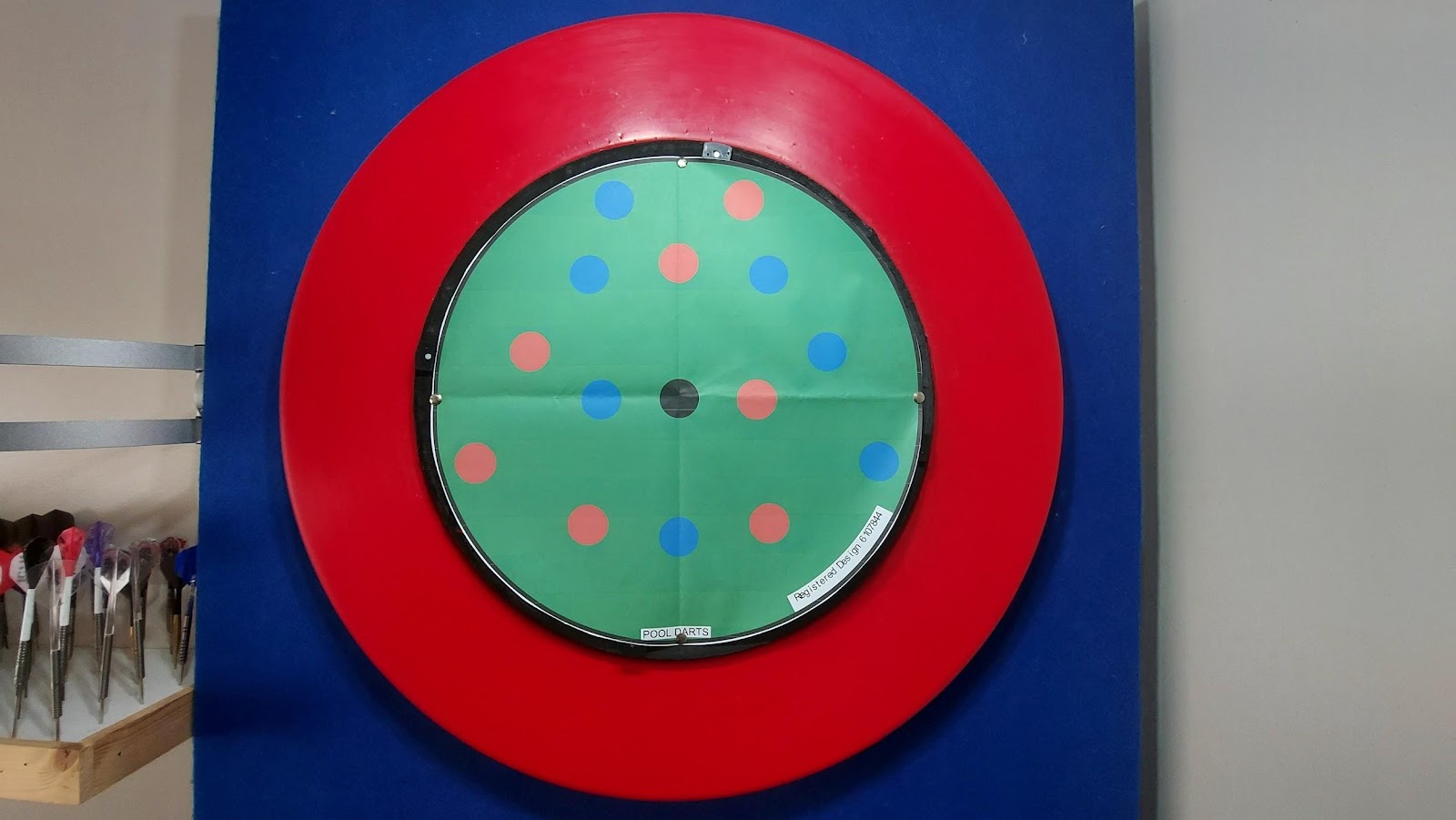 This was a little harder to play alone, as it is intended as a two player game. The premise is to 'pot' your coloured balls before your opponent pots theirs, allowing you a chance to pot the black ball first to seal the win. Thankfully I managed to set this game up correctly, remembering to remove the number ring to enable a better fit for the overlay. 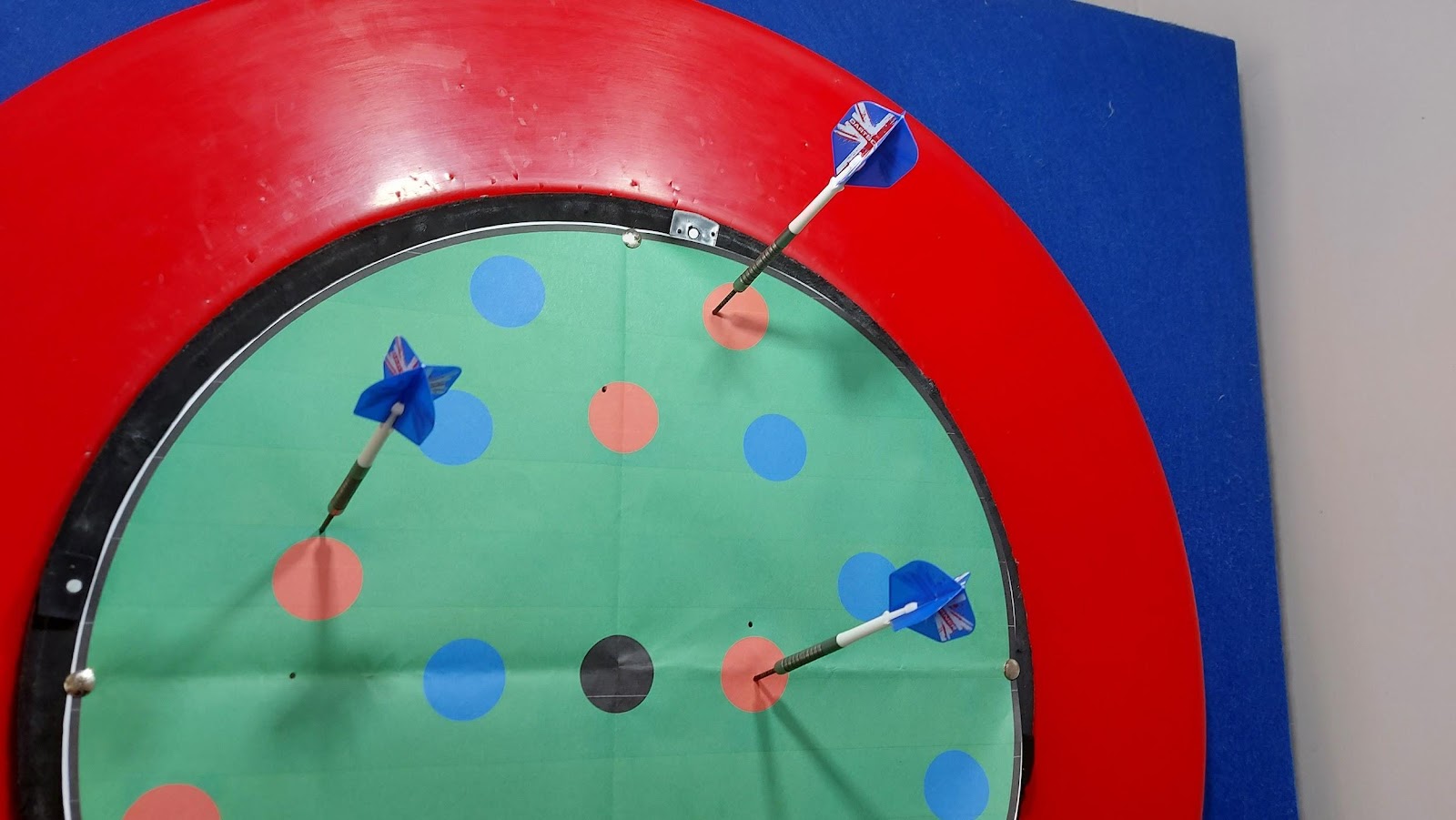 While perhaps not as enjoyable due to the lack of an opponent, it was still possible to play the game solo, simply trying to pot all 7 balls, and then the black ball in as few darts as possible, while sticking to the 1 shot per throw rule. If I missed, the 'visit' ended. My personal best was eight visits - I never quite seemed to get the hang of the balls higher up the board.

I would've liked to have seen some variation into the sizes of the balls, to perhaps increase the difficulty somewhat. With that being said, as a competitive party game, this game is truly perfect, and has the potential to provide you and your friends/family/teammates with hours of fun. The adaptive difficulty enables you to challenge yourself, or allow the game to balance out when playing with weaker players, giving them an opportunity to win!

Thank you to Original Dartboard Overlays for sending this fantastic pack out to me to review - a review of the 'Games Pack 2' and '9 Dart Drill' will soon follow, so stay tuned to the Darts World website!

All six packs are available through Original Dartboard Overlay's eBay page, and are priced at just £4.99, with a 96p shipping fee. I would love to see these stocked by a major supplier in the future, and definitely feel they have the potential to be a huge hit! If you have any questions about the overlay I have reviewed, or perhaps a question concerning the other packs in the ever-expanding range, Original Dartboard Overlays are on Twitter, '@OriginalDartbo1'.