Below is the Darts World 'Star Profile' of Terry O Dea written by Wayne Baker for our 132nd edition. It is reproduced, almost verbatim, to mark the sad occasion of Terry's passing (18th May 2021) at the age of 76.


STUDYING the rugged and muscular make-up of 6ft 2 ins 16 stone Australian darter Terry O Dea it is easy to understand why he has attracted the nickname 'The Towering Inferno'. 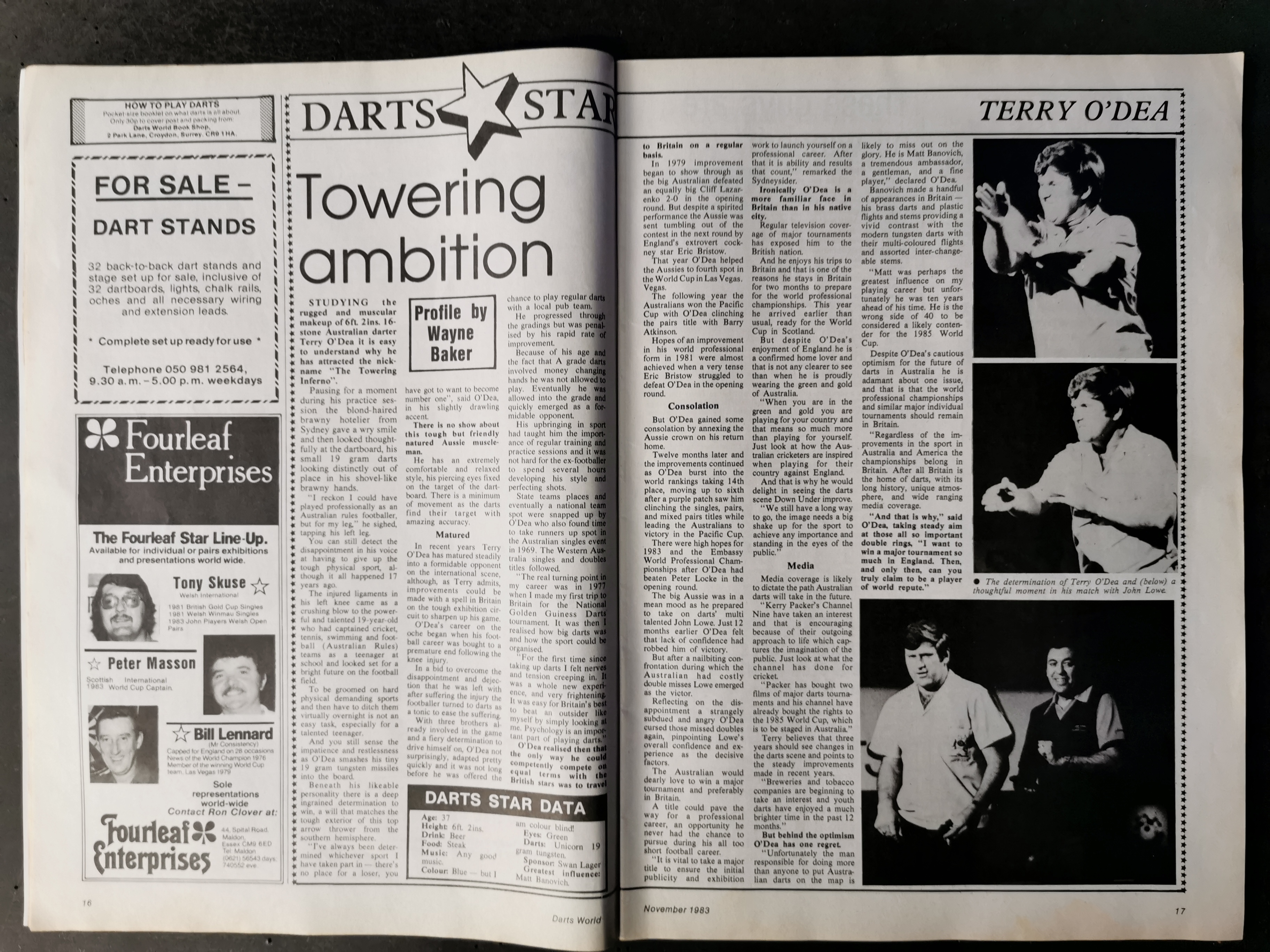 Pausing for a moment during his practice session the blonde-haired brawny hotelier from Sydney gave a wry smile and then looked thoughtfully at the dartboard, his small 19g darts look distinctly out of place in his shovel-like hands.

" I reckon I could have played professionally as an Australian Rules footballer, but for my leg" he sighed tapping his left leg. You can still detect the disappointment in his voice at having to give up the tough physically demanding sport, although it all happened seventeen years ago.

The injured ligaments in his left knee came as a crunching blow to the powerful and talented 19-year-old who had captained cricket, swimming and football (Aussie rules) teams as a teenager at school and looked set for a bright future on the football field.

To be groomed on physical sports and then have to switch from them virtually overnight is not an easy task especially for a highly talented teenager, and you still sense impatience and restlessness and O Dea smashes his tiny tungsten missiles into the board.

Beneath his likable personality, there is a deeply ingrained determination and desire to win, a will that matches the tough exterior of the top darter from the Southern Hemisphere.

" I have always been determined, no matter what sport I take part in - there's no place for a loser, you have got to want to become number one" says O Dea in a slightly drawling accent.

There is no show about the tough but friendly-natured Aussie muscle man/ He has an extremely comfortable and relaxed style, his piercing eyes fixed on the target of the dartboard. There is the minimum of movement as the dart find their way to the target with amazing accuracy.

In recent years Terry o Dea has matured into a formidable opponent on the International scene, although, as Terry admits, improvements could be made with a spell in Britain on the tough circuit to sharpen up his game.

Terry took up the game in a bid to ease the disappointment of being forced to give up his footballing ambitions and with three brothers already involved in the game and his trademark fiery determination O Dea adapted pretty quickly and it was not long before he was offered the chance to play regular darts with a local team.

As he progressed through the gradings and was penalised for the speed of his improvement. Due to A grade darts involving money and Terry being under the minimum age, he was not allowed to play. Eventually, he was admitted and soon became a feared opponent.

Terry's upbringing in other sports had taught him the importance of regular training and practice sessions thus it was not hard for him to spend several hours perfecting his shots and developing his style. Stae team places and even a National team spot soon followed for O Dea who claimed the runner-up spot in the  Australian Singles as long ago as 1969.

" The real turning point in my career was when I made my first trip to Britain for the National Golden Guinness Darts tournament. It was then I realised how big darts was and how the sport could be organised."

" For the first time since taking up darts I felt a certain tension creeping in, it was a whole new experience, and very frightening. It was easy for Britains best to beat an outsider like myself by simply looking at me. Psychology is an important part of playing darts"

O Dea realised then that the only way he could compete on equal terms with the British stars was to travel to Britain on a regular basis. 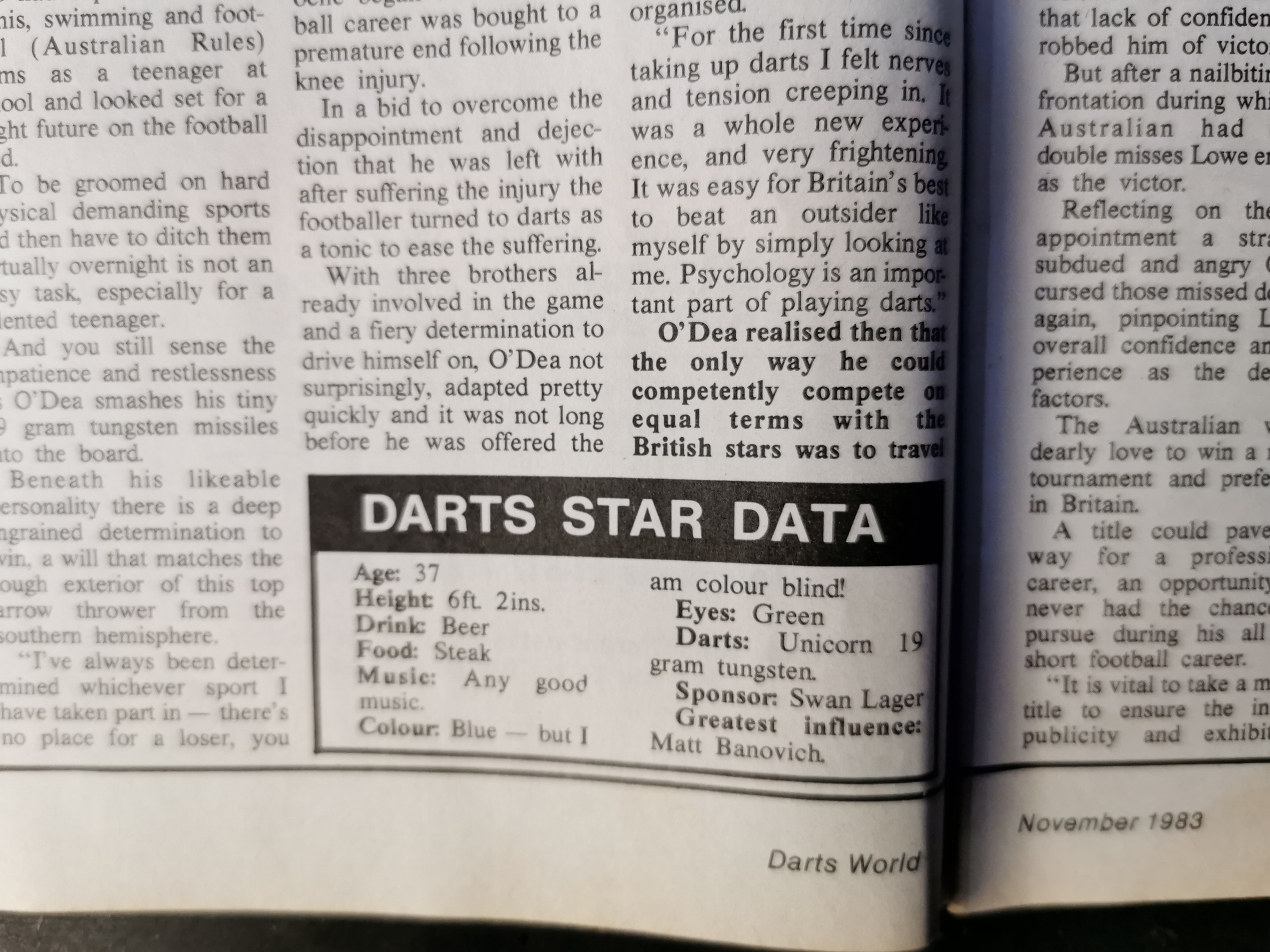 In 1979 improvement started to show through as the nig Australian defeated an equally big Cliff Lazarenko 2-0 in the opening round of the World Championship. But despite a spirited performance the Aussie was sent tumbling out in the next round by England's extrovert cocksure cockney Eric Bristow.

That year O Dea also helped the Aussies to fourth spot in the World Cup in Las Vegas with victory in the Pacific Cup, O Dea clinched the title in the pairs with Barry Atkinson, coming the following year.

Hopes of an improvement in his Worl Professional form were almost achieved when a very tense Bristow struggled to defeat O Dea in the first round of 1981. But he gained some consolation when he annexed the Aussie crown upon returning home.

Another twelve months past and the improvements continued as  O Dea burst into the world rankings debuting in 14th position. He rapidly moved up to sixth after a purple patch saw him clinching singles, pairs and mixed pairs titles whilst leading the Australians to victory in the Pacific Cup.

There were now high hopes for 'the Embassy' which increased after terry defeated Peter Locke in the opening round. The big Aussie was in a mean mood as he prepared to take on dart's multi-talented champion, John Lowe. He felt that a lack of confidence had robbed him of victory in the quarter-final twelve months previously.

After a nail-biting confrontation in which the Aussie missed key double opportunities, Lowe emerged the victor (3-2) again. Reflecting on those moments a strangely subdued and angry O Dea cursed those missed doubles and pinpointed Lowes overall confidence and experience as the deciding factors.

The Australian would dearly love to win a 'major' tournament and preferably in Britain. A title could pave the way for a professional career, an opportunity he never had the chance to pursue in football.

" It is vital to take a major title to ensure the initial publicity and exhibition work to launch yourself on a professional career, after that its ability and results that counts," remarked the Sydneysider

Ironically O Dea is a more familiar face within these shores than in his native city. Regular television coverage of tournaments has often exposed him to the British nation. He enjoys his trips to Britain enough to spend two months prior to each World Championship, although this year he arrived even earlier to prepare for the World Cup in Scotland.

But despite his enjoyment of England O Dea is a confirmed home lover which is never clearer than when he is the green and gold of Australia:

"When you're in the green and gold it just means so much more than playing for yourself, just look at how the Australian cricketers are inspired when playing for their country against England."

That is why Terry would like to see the darts scene Down Under improve:

" We still have a long way to go, the image needs a big shake-up for the sport to achieve any importance and standing in the eyes of the public."

Media coverage is likely to dictate the path of Australian darts in the future. "Kerry Packer's Channel Nine has taken an interest which is encouraging given their ongoing approach to life which captures the imagination of the public. Just look what the channel has done for cricket." "Packer has already bought two films of major darts and his channel have already bought the rights to the 1985 World Cup, which is to be staged in Australia"

O Dea believes that three years should be enough to see changes in the darts scene and points to the steady improvements made in recent years. He adds:

"Breweries and Tabacco companies are beginning to take an interest and youth darts has enjoyed a much brighter time in the last 12 months."

Behind the optimism, O Dea has one regret and even that is not for himself:

" Unfortunately the person most responsible for doing more for putting Australian darts on the map is likely to miss out on the glory. He is Matt Banovich, a tremendous ambassador, a gentleman, and a fine player." Declared O Dea.

Banovich made a handful of appearances in Britain - his brass darts and plastic flight and stems making a vivid contrast with the modern tungsten darts with their multi-coloured and interchangeable accessories:

"Matt was perhaps the greatest influence on my playing career but unfortunately he was ten years ahead of his time. He is the wrong side of 40 to be considered a likely contender for the 1985 world Cup."

Despite Terry's cautious optimism for Australian darts, he is adamant about one issue, that is that the world Championship and other similar major individual events should remain in Britain.

" Regardless of the improvements in the sport in Australia and America, the championships belong in England. After all, Britain is the home of darts, with all its long history, unique atmosphere, and wide-ranging media coverage."

" And that is why," said O Dea, taking steady aim at those all-important double rings, " I want to win major tournament in England. Then and only then can you claim to be a player of World repute".