KIERAN Colquhoun is a darts YouTuber who has been building a loyal and enthusiastic following over the last few months. Recently he began some collaborations with our own Joe Reid. The two are trying to produce a different and more comprehensive style of equipment review that gives more knowledge to darts players and fans and tries to assist them in making informed choices. 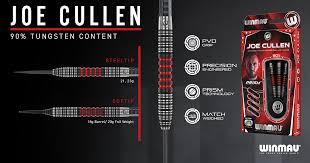 Click on the image to see review
We asked Kieran, otherwise known by his no-nonsense channel moniker of  'Scottish Lad Does Darts Reviews' where he gets his inspiration:


People have asked me what my inspiration was in starting my darts review channel, and the answer is simple. I have been watching many of the best Dartubers for years and the three in pictures were my biggest inspirations.

Neil's darts is always one I enjoy watching. His content is so easy to relate to and he is honest with his reviews if there's something that can be fixed he will mention it. Obviously, an additional reason that I follow his channel and have a connection is that Neil was the original Scottish Darttuber and to this day he is still the number 1.

Darts Review Channel is the OG reviewer in the darts community, his reviews are so detailed and he takes the time to go over every aspect of the dart sets he is reviewing. Darren always has time to answer any questions well at least I have found he does when I have had any questions. He has reviewed over 1000 sets in his time as a darts reviewer and I have to say is the pinnacle of what us darts reviewers can one day achieve.

Atomic Darts is my favourite stateside reviewer, his reviews are fantastic and simplistic which is what I like to see. He is also the host of the best interview/talk show style on YouTube with his coffee and darts show. He has interviewed some very interesting people and some very inspiring people in hopes of helping out the entirety of the darts community.

In short, the reason I got into being a darts reviewer Is because I had the belief I could do it and although I have had help from most of the darts community these 3 people have always offered constructive criticism which in turn helps me make the channel better.